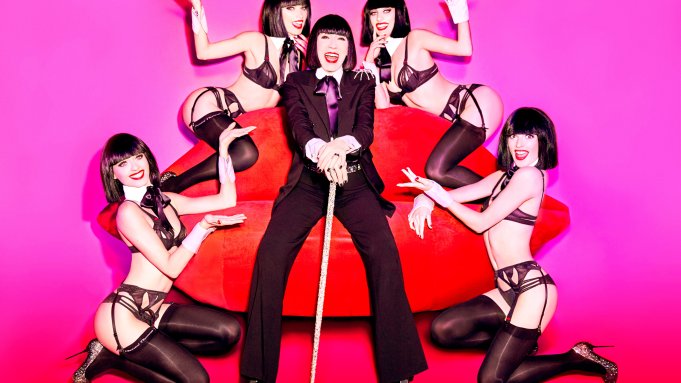 TOPSY-TURVY: In a collaboration celebrating 65 years of business for the Crazy Horse, the long-reigning queen of Parisian lingerie Chantal Thomass gave a teaser of an upcoming show that shines the spotlight on her underwear design, yet with all the bare skin for which the famous Parisian cabaret is famed. “Dessous Dessus, Upside Down” was served up Thursday afternoon with Champagne and possibly the first éclair inspired by a nightclub dancer, a special Crazy Horse creation by Fauchon.

Billed “The Lady of the House” by the cabaret, since Thomass was also in charge of the show’s set design, she played with the feminine-meets-masculine codes often found in her designs.

“The craziest part was taking on an entirely new vocation,” Thomass told WWD. “I’ve never done a show. I’ve directed runway shows, but never a live show. It’s challenging because it’s different. You have to work with technicians, with the dancers, the choreographers and so on. It was fun.”

The fun began with BrExcite Me, a pun on Brexit, involving marching dancers wearing giant black bearskin hats of the Buckingham Palace guards plus Union Jack-inspired collars. In the ideal act to highlighting the variety of her underwear lines, Thomass used the setting of a changing room, with two dancers shimmying in and out of everything from discreet heart-decorated negligees to corset designs.

“It’s another way to show the collections,” she said. Closing the preview, performers danced out of a top hat, wearing designs from Chantal Thomass’ current collection: balconette-style bras and suspender belts, complete with the brand’s signature white collar and black tie ensemble.

“Dessous Dessus, Upside Down” opens on Oct. 5 and runs through New Year’s Eve.