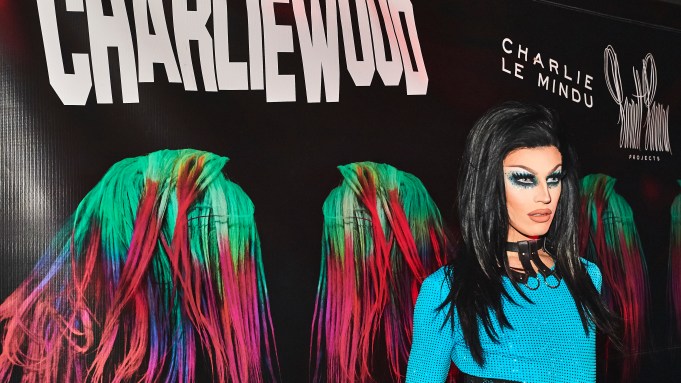 CHARLIEWOOD: Charlie Le Mindu isn’t your standard hairdresser, the kind you visit for a trim every couple of months.

The Paris-based artist — whose preferred medium is real and synthetic hair, occasionally mixd with a resinlike substance — is best known for his sculptural, elaborate dresses and headpieces worn by everyone from Lady Gaga and Peaches to Lana Del Rey.

On Nov. 28, Le Mindu brought his famous “Charliewood” show — a play on Dolly Parton’s “Dollywood” — to Manhattan’s Cedar Lake venue for its Stateside debut. The kooky performance, which blends music, dance and video, was unveiled last spring at the Palais de Tokyo in Paris, where it had a month-long run.

Billed as “an exhibition of transgressive movement” and produced by Barrett Barrera Projects, the event was hosted by Ladyfag and Debbie Harry, the latter of whom showed up in black sunglasses and — embodying the name of her band, Blondie — a blonde wig that extended past her knees. (At one point, during a photo opp, Rose McGowan draped a piece of Harry’s wig over her own shaved head.)

One of the aforementioned performers, modeling another of Le Mindu’s headdresses, was dressed — er, undressed — as a chicken, while pushing around a shopping cart full of eggs and a Kentucky Fried Chicken basket. Guests followed her through a makeshift door into a separate room where the “Charliewood” show began, captivating a packed room with a series of drag performances, video art and dancers wearing Chewbacca-esque costumes.

Backstage before the show, Le Mindu and his staff frantically prepped the naked dancers in white body paint. “There are lots of different feelings,” he said, describing the act. “It can be amazing. And then sometimes it can be awkward. I adapted the performance to the U.S. — it’s more about fantasy and less serious.”