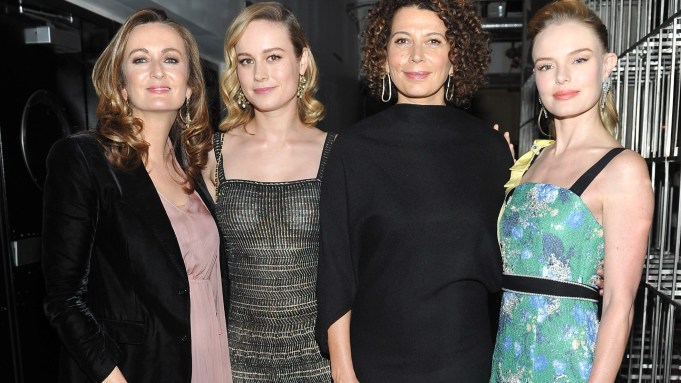 The Incredible Women list, now in its third year, grew out of a cover line on Porter’s first issue. It has since spawned a talk series that began with Christy Turlington Burns in 2014 and has included American Ballet Theater principal dancer Misty Copeland, film director Sofia Coppola and Serpentine chief executive officer Yana Peel. The first gala was held last year in London at the V&A Museum.

Partnering with Langley, who was profiled in the magazine in the past, made sense since this year’s list of 50 women was focused on the entertainment industry. The timing of this year’s gala comes when women in the industry have banded together in support of speaking out against sexual harassment. The magazine commissioned women including Copeland, Larson and the organizers of the Women’s March, Tamika Mallory and Bob Bland, to write open letters touching upon crucial issues facing women in the world today.

Yeomans said she first attended a Letters Live event in London two years ago and that she was “blown away by the sheer power and authenticity of the experience,” adding, “I didn’t want to replicate the traditional magazine awards format and felt that by working with Letters Live we could create an evening that was unique, impactful and memorable.”

Larson, Blige, Copeland, Banks and Welch were among those who did on-stage readings before the 120-person dinner. The evening was in support of Vital Voices, a nonprofit, non-partisan organization that invests in and builds capacity for global women leaders.

Langley, who serves as an ambassador for Vital Voices Global Ambassadors Program and is on its board, noted, “On behalf of Vital Voices, we are honored to be an integral part of Porter’s Incredible Women initiative. With its network of more than 15,000 powerful women leaders who run schools, build companies, change laws and serve in government, Vital Voices fuels transformation at every level of society. These women leaders not only make our world more productive, but also more prosperous and peaceful.”

The next Incredible Women event takes place in London Nov. 28 with Victoria Beckham as speaker.