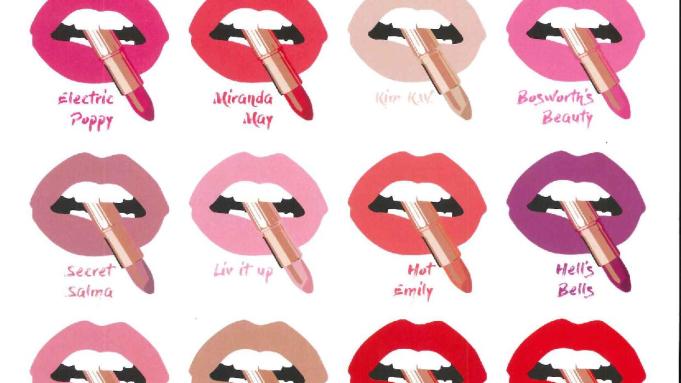 BLOWING KISSES: Charlotte Tilbury is launching a slew of new lipsticks — and other products — with proceeds from sales of the former going to Women for Women International, the charity that helps victims of poverty, war and political conflict.

The celebrity makeup artist and beauty entrepreneur will later this year unveil Hot Lips, a collection of 12 shades named for women she admires — and works with — including Miranda Kerr, Nicole Kidman, Salma Hayek, Helena Bonham Carter and Kim Kardashian West.

During a dinner at the Arts Club in London this week to talk about the launches, Tilbury pointed out that lipstick is so important to women’s well-being that Winston Churchill insisted its production not be halted during World War II.

“It’s a tube of happiness,” said Tilbury, who said each new shade is meant to capture the character and coloring of the woman it’s named for. Miranda May — named for Kerr — is a fresh pinky coral, while Kidman’s Kiss is a rose-petal pink, and Kim K.W. is a vintage-inspired pale pink nude.

“When she wears this color, she evokes the Sixties tartlets like Raquel Welch and Sophia Loren,” said Tilbury who’s a big Kardashian fan. “Love her or hate her,” she has a face that is perfection from every angle, said Tilbury.

In June, Tilbury will be carting boxes of her lip colors to Kosovo and distributing the tubes to women benefiting from the charity. In July and August, for each lipstick sold at retail, Tilbury’s company will donate 1 pound, or $2, to Women for Women International.

Tilbury and her team are also sponsoring women in the program.

Other new products include The Five Minute Face, a palette with shadows, bronzer, and blush that’s meant to give a natural, glowing look; Legendary Lashes mascara that aims to give a “Hollywood false-lash effect inspired by legendary starlets and supermodels;” and Legendary Brows, a precision brush-on gel “which captures all the fine hairs without making you look like Groucho Marx,” said Tilbury.