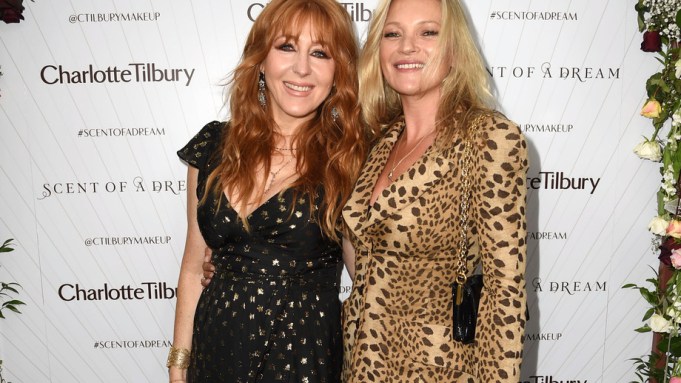 LOVE-IN: Kate Moss — in virtual and live versions — and Candi Staton were on board to publicize the launch in London of Charlotte Tilbury’s first fragrance, Scent of a Dream, which hit U.K. counters last month.

The event in Covent Garden on Thursday featured a virtual reality experience starring Moss, with guests able to explore outer space wearing special goggles and follow Moss and model Nathan Mitchell as they dance among the stars.

“I was obsessed from the beginning about virtual reality and people being able to enter this mind-altering state,” Tilbury told WWD. “No one had ever used virtual reality for fragrance before, and I thought it would be exciting to feel you were Kate Moss in the video, as she is one of the most iconic — and private — women in the world, and no one has ever been able to get that close to her.”

The large crowd that gathered outside the dome in the center of the piazza was able to watch a virtual reality video and see Staton perform live Tilbury’s favorite song, “You’ve Got The Love.”

Midperformance Staton passed Moss the microphone, and she did an impromptu performance of Elvis Presley’s “Suspicious Minds” for the crowd.

“Charlotte and I have always had this instant, naughty chemistry,” Moss said. “Charlotte has this electric passion and energy for life — she’s a bit magical.”

“When I think about Candi Staton, Kate Moss and the perfume, the one common thread that they have is that they’re very mesmerizing, euphoric, intoxicating — powerful people ignite these feelings,” said Tilbury.

The makeup artist and entrepreneur added that she won’t stop at one fragrance. “I do think that I will do more, why not? There is another story I am already dreaming up to tell.”