The makeup artist is hosting a week-long, pop-up beauty event. 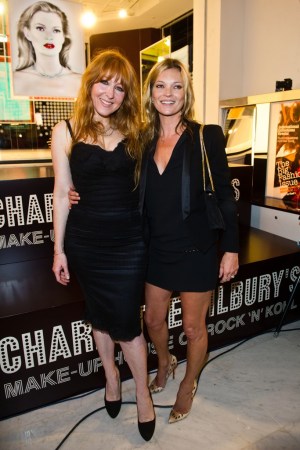 LONDON — Charlotte Tilbury is raising her profile in a big way, with a pop-up beauty event – featuring fine art – that launched on Monday night at Selfridges.

Kate Moss, Mario Testino, Helena Bonham-Carter, Katie Grand, Alannah Weston and Alice Temperley gathered in the store’s Wonder Room to witness the unveiling of Moss’ portrait, which was shot by Chris Levine using the same lenticular technology he employed for the images of Queen Elizabeth released last year to mark her Diamond Jubilee.

Levine shot a variety of images, including a portrait of Moss with her eyes closed, which is currently in the window of Selfridges. The centerpiece is a 3-D light installation that looks as if Moss’ eyes are following the viewer.

Tilbury, who introduced Levine to Moss and worked on the model’s makeup for the sitting, said: “It was the quietest, most mesmerizing shoot I’ve ever been on, and I’ve been doing this for 23 years.”

With Rock ’n’ Kohl, Tilbury is aiming to bring makeup – products, philosophies, techniques and general thoughts – to a wider audience. She is also planning on launching her own beauty brand, including color cosmetics, later this year.

The pop-up event, which runs until June 23, will offer makeovers, tutorials and store appearances from Tilbury’s friends such as Cara Delevingne, who will chat about life backstage during the fashion weeks.

“Consumers are getting more and more savvy, they want increasing access to everything they are buying, and I’m not the type of person to share that information in a clinical way. I wanted it to be fun, and to do it with friends,” Tilbury said.

Guests at the pop-up’s evening events will receive a free sample of a product known as Charlotte’s Magic Cream, which her friends and clients have been using for years. It’s a hand-blended cream Tilbury has been making herself for the past 20 years and which she refers to as “luminosity in a jar.”

Her friends say that Tilbury loves her creams and color cosmetics so much that she never takes them off. “She sleeps in her full make up,” said Grand. “She goes to bed with it on, wakes up and just does it again. But who cares about the pillowcases when she looks that good?”