Charmed, I’m Sure… A Mob for Mendes… Bulgari and Ricky Martin Hook Up…

Jeweler Stephen Dweck wants everyone to have a piece of him. 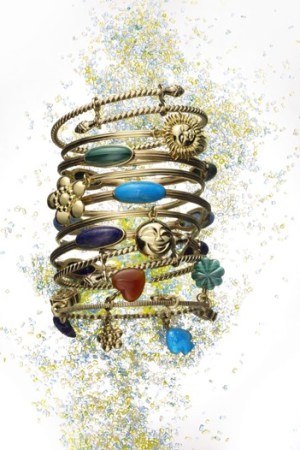 CHARMED, I’M SURE: Jeweler Stephen Dweck wants everyone to have a piece of him. After signing on for a line with multichannel retailer QVC, Dweck will this month bow Garden of Stephen, an exclusive line with Bloomingdale’s. The assortment of charms with motifs such as crescent moons, spades and apples come in silver or 18-karat gold plate over bronze with prices from $100 to $995 for a necklace with details of lapis, turquoise and malachite. “I wanted to create a fresh sensibility that is irresistibly collectable, to appeal to the intelligence of the new and emerging jewelry customer,” said Dweck, a self-proclaimed horticulture-lover, who counts his inspiration as the “natural beauty discovered in the Garden of Eden” and in his own garden.

AT EVA’S COURT: Eva Mendes dropped into the Calvin Klein Jeans flagship in Milan on Wednesday night, drawing hordes of young Italian men away from their mothers. “Being part of such an iconic American legacy is a dream come true,” said Mendes, who is the face of the label’s denim and underwear ad campaigns. Wearing a blue sequined coat over a gray shift dress, both from Calvin Klein Collection, the 35-year-old added that, being in Italy for the fifth time this year, she was thinking of dipping into the property market here, “somewhere near the water.” Como, perhaps? It looks like George Clooney could be getting another A-list neighbor.

PARTY IN THE USA: Bulgari’s 125th anniversary will come to a close at the end of the year, but the party is just starting on this side of the pond. Tonight, Ricky Martin will host a dinner in Miami alongside the firm’s chief executive officer, Francesco Trapani, in honor of the Roman jewelry company’s anniversary auction for Save the Children’s Rewrite the Future campaign. Ben Stiller, Debra Messing, Jessica Biel and Selma Blair are among those who have supported and been featured in the advertising campaign, which is dedicated to provide education for eight million children living in conflicted areas. Bulgari aims to raise $15 million by the end of the year for the cause, and donated $1.5 million at the beginning of 2009. Local celebrities such as Gloria and Emilio Estefan are expected to be among the 50 guests attending the Miami dinner.

On Nov. 19, Bulgari vice chairman Nicola Bulgari and Save the Children’s president and ceo Charles MacCormack will host the likes of Jason Lewis and other celebrities at a dinner in Los Angeles to thank those who were featured in the campaign. The following night, Christie’s, which is auctioning a special collection of $6 million worth of Bulgari jewelry and watches to benefit Save the Children, will hold a party at Bulgari’s Beverly Hills store. Next month, the collection will travel to New York, where it will be auctioned at Christie’s on Dec. 8.

FINE ART: Alec Baldwin, Richard Gere and Carey Lowell will host Artwalk on Tuesday at New York’s Skylight Studio, benefiting the Coalition for the Homeless. The event, celebrating its 15th anniversary, will also honor painter Pat Steir. Artists who have donated works to be auctioned include Steir, Jeff Koons, Ed Ruscha, Cindy Sherman, Jenny Holzer, Donald Baechler, Robert Longo and Matthias Vriens-McGrath. To give members of the benefit committee a firsthand look at the Coalition’s work, Artwalk co-chair Bettina Prentice has been leading volunteer trips in the group’s feeding vans, which serve 1,000 hot meals a night.

TAILORED TUNES: “Music and I are very good friends and sometimes worst enemies. When I work, it can take me in too many different directions,” said Alber Elbaz at the launch of his pal Mika’s “Songs for Sorrow” book of illustrations at Lanvin’s Savile Row men’s store in London on Thursday night. Guests, including Christian Louboutin, Dinos Chapman, Tiphaine de Lussey, Stephen Jones, Lara Bohnic and Kinder Aggugini sipped mint and lemon vodka cocktails as tunes by Alicia Keys, Jay-Z and Cat Power boomed through the store thanks to an eclectic party playlist from Mika’s iPod. “If I had to choose between art and clothes, it would definitely be art. I don’t even have a house — I just buy art. I get given clothes for free,” quipped the British pop star, whose book, which features an Elbaz illustration, will go on sale exclusively at Lanvin boutiques. Containing a CD with four of the artist’s new acoustic songs, the tome will retail at 20 pounds, or $33.

SHOWING BIAS: Could a Madeleine Vionnet influence creep into the next round of international collections? You might expect so, considering the impressive crowds — including a wide swath of top-tier fashion designers said to range from John Galliano to Rick Owens — who have filed through the Vionnet retrospective at Les Arts Décoratifs in Paris. The show, which opened in June, has already attracted more than 137,000 visitors, outpacing similar exhibitions, according to the museum. It winds down at the end of January.

GIRL POWER: Paris-based children’s wear brand Dino e Lucia has been given the presidential seal of approval — well, the President’s daughters’ seal of approval, at least. Malia and Sasha Obama wore dresses by the brand in the first official Obama family portrait by Annie Leibovitz released last month. Designed by Sieglinde de Plas, Dino e Lucia counts a store on the Left Bank of Paris as well as a Saint-Tropez location and select wholesale clients, including Barneys New York.