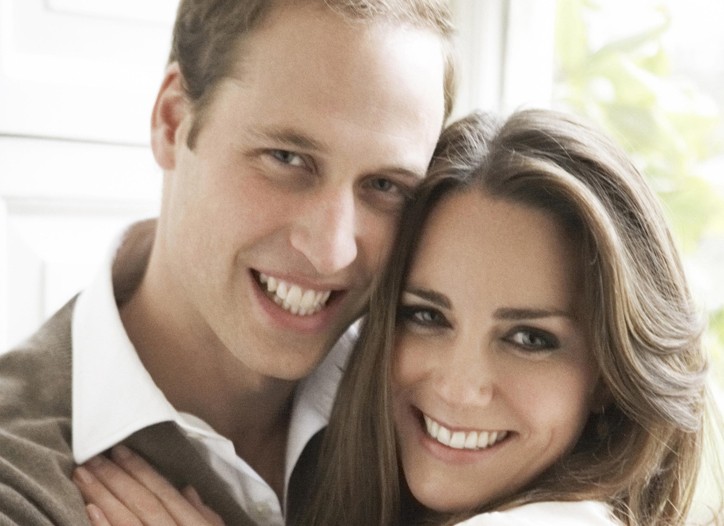 PORTRAIT AT THE PALACE: Prince William and Kate Middleton have been keeping a decidedly low profile as a couple since they announced their engagement last month, but they made the front pages of British newspapers on Sunday with the release of their official engagement portraits. Shot by Mario Testino, who famously photographed Princess Diana for Vanity Fair shortly before her death and Prince Charles with his sons, the new snaps feature a close-up of the smiling couple, and a more formal, full-length shot. “I’m very happy that I’ve been asked to cover this historic moment, that the whole world was waiting for,” said Testino in a statement. “They are in their prime and brimming with happiness. I have never felt so much joy as when I see them together.” Both pictures were taken at St. James’s Palace, the official headquarters of the British monarchy, a short walk from Buckingham Palace. In one, Middleton dons a white dress with bracelet sleeves and a ruffle at the front from the fashion retail brand Reiss, and in the other she wears a white blouse from Whistles, another British fashion retail label. Prince William is wearing a blue suit and matching tie from British brand Turnbull & Asser in one, and a camel V-neck sweater from Italian brand Brunello Cucinelli and a Turnbull & Asser white shirt in the other, according to a Clarence House spokeswoman.

CHASING BEAUTY AT RRL: The bold and the beautiful were bountiful at RRL’s party on Thursday to celebrate the new photography book “Chasing Beauty” by Richard Phibbs. When not noshing from a taco truck or bopping to tunes spun by the DJ sequestered on the Los Angeles store’s roof, guests at the party hosted by celebrity publicist Stephen Huvane rubbed elbows with Polo Ralph Lauren executive Alfredo Paredes, Rande Gerber, models Ryan Burns and Chad Cole, and stylists Elizabeth Stewart, Vincent Boucher and George Kotsiopoulos. Arianne Phillips was effusive with her praises for Phibbs, who had picked her from a list of stylists to work with on a new Banana Republic fragrance ad. “It was magical,” Phillips recalled of their first collaboration. If she has her way, they’ll team up again. “He’s a beautiful person, inside and out,” she said.

NEW BLOOD: The second generation has come on board at Cathy Waterman, the Santa Monica, Calif., jeweler. Fresh from stints at Michael Kors and Nina Ricci in New York, Claire Kislinger has returned home to work with mom. “I’m learning the family business,” Kislinger said during a visit to Dallas with her mother and the latest collection. “I kind of knew and always dreamed that I’d go into it.” Kislinger, 25, earned her degree at NYU Gallatin in the self-styled major “the construction of appearance and its influence in identity.” She’s had design aspirations, drawing her first gold, ruby and emerald flower ring when she was about 11, which her mom secretly produced and presented for her 12th birthday.

Joanne Teichman, owner of Ylang 23 and Waterman’s biggest independent account, hosted the designer and 38 other women for lunch Tuesday at her home. The designer, who started the business in 1990, still has an unlisted number and narrow distribution to retailers including Barneys New York and Twist in Portland, Ore.

ORIENTATION SESSION: Christian Lacroix will be bringing his flair for mixing unexpected fabrics and bold colors when he art directs “The Orient of Women,” an exhibition at the Musée du Quai Branly, Paris’s home for the indigenous arts, opening Feb. 8 and running through May 15. It is to feature 150 pieces of traditional dress, jewelry and accessories from the Middle East dating from the 19th century to the present, all hand selected by Lacroix.