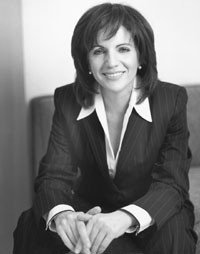 GOING ONCE, GOING TWICE: Property from the collection of Bernard and Josephine Chaus, the late cofounders of Bernard Chaus Inc., will be sold in a series of auctions at Sotheby’s in New York,  beginning this month. Collected over the course of nearly four decades, the sale includes works of art ranging from fine paintings and jewelry to European furniture.

Among the jewels being auctioned on April 19 is a platinum and diamond ring, estimated between $1.2 million and $1.8 million from Josephine Chaus’ personal collection. The ring features an emerald-cut diamond weighing 15.37 carats, D color, VVS 1 clarity, and is potentially internally flawless.

Furniture and decorative art from the Chaus’ Upper East Side townhouse, decorated by Peter Marino, will also be auctioned during the Collections sale in October. The pieces range from chandeliers and mirrors to side tables and candlesticks. One of the highlights of the sale is a set of four George IV gilt-brass four-light chandeliers, estimated between $150,00 and $250,000.