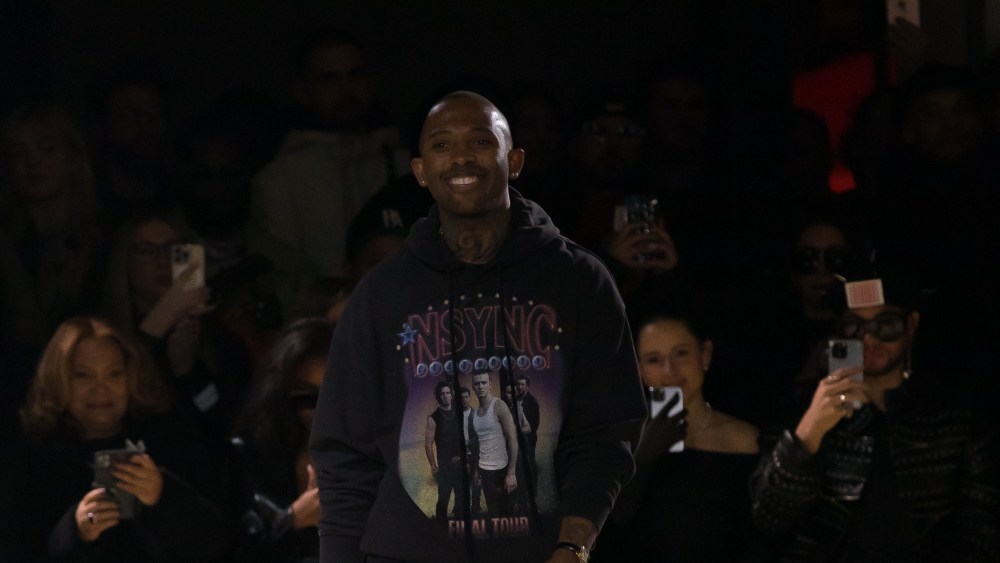 For designer Chaz A. Jordan, the past decade has “been a minute” as he gave the final adjustments ahead of the first show of 1989 Studio, his latest brand founded in 2021.

Showing in Paris, “doing damage like Rick [Owens] and Balmain under Christophe Decarnin” in the same venues, felt like an investment finally coming to fruition.

“My time here was special super formative — 2013 is when I moved to Paris. I was with Virgil [Abloh] and that whole crew, we were running around, it was watching the throne period,” he recalled.

Now that he was there, the moment felt bittersweet but he was “glad that [he and the team] finally made the statement in the right time,” with some of the old crew, including Don C and Salehe Bembury in his front row.

It also felt like the beginning of a new chapter for Jordan, after 2022’s summer of changes that saw him part with Ih Nom Uh Nit, sold to “one of the Italian groups” he declined to name and currently on hiatus, and the acquisition of 1989 Studio by Italian retail company Folli Follie Group a month later in a deal he described as “essentially a lifetime deal with a large equity stake.”

The label was born of Jordan’s pandemic-time observation that a relatable brand with a more affordable price point would find resonance.

“Many people were affected financially so I wanted to offer a product and experience that [they] would find uplifting,” such as nostalgic references, he explained.

Jordan decided to forgo giving his name to the brand since “way more people related to 1989 than to Chaz Jordan,” he said. The date, his year of birth, might be specific but anyone in “a three-year-plus or -minus [range] on either side” can still consider themselves part of the 1989 Studio family, he joked.

Another idea he wanted to pursue was that the brand was less about dictating a specific look and more about offering options that cater to a wide range of styles and sizes.

In a nutshell, the brand that resulted can be “whatever you want,” a tag line the designer and his team often tossed about when asked about style choices.

Built in the manner of a wardrobe, Jordan created the range by considering his sartorial needs “from the time I wake up to the time I go to sleep,” starting with basics of T-shirts, sweats and denim; followed by suiting and leather pieces, and up to faux-fur, this season’s latest addition. The brand has grown from 60 references in its first season, to 160 for fall 2023.

Throughout, particular attention was paid to the fabrications and textiles, with Jordan saying that he’d favored lower margins to keep prices at a contemporary price level.

Prices for 1989 Studio start around 200 euros for printed T-shirts and 400 euros for denim, with its popular “Rue Saint Honoré” sweatshirts going for 395 euros. Sitting at the higher end are leather jackets, between 1,000 euros and 2,400 euros, and the range’s most expensive item is a suede puffer with a recycled down feather filling, retailing for less than 3,000 euros.

That’s not to say he will limit the brand’s output to staple items. Unveiled at the show was also a 25-pair limited-edition run of its sneakers, in collaboration with artist Swithadot Studios and lace expert Customs by J1, that will retail for 5,000 euros.

“I feel like it’s important to establish yourself at that high level, but a majority of the collections will always be accessible,” Jordan noted, calling this “culturally accessible luxury.”

He sent out a coherent lineup of baggy trousers, boot-cut jeans, hoodies, knits, leather jackets, smartly cut blazers and trousers, offered up in permutations across a broad range of character archetypes. There was even a floor-grazing skirt, worn by male and female models to striking results.

While Jordan designs with a gender in mind so the overall range “doesn’t become one blur,” the brand intends to straddle the men’s and women’s divide by following the designer’s belief that “when it comes to apparel, you can for sure interchange the two — it’s just a matter of sizing.”

Cases in point: his own penchant for Chanel pearls, a vintage cardigan he “literally took off a grandma,” and a snazzy Liz Clairborne denim jacket from the ‘90s.

Not only does it foster inclusivity, but it’s also a canny business decision. Jordan pointed out that limited size range excludes “all the people that will promote your brand for free,” such as celebrities and athletes.

As it stands, the brand will go up to a 3XL, and a size 40 waist in denim, in addition to offering custom-made services for anyone outside the range.

Friday’s show also marked an ambitious step in the brand’s commercial development, which hovers around 15 retail points and its own e-commerce, supported by the group’s investments.

For now, Japan is the brand’s largest market, followed by Europe. Despite being Jordan’s home market, the U.S. remains a tough nut to crack because his “peers have such a strong hold,” making him feel like “a little brother” trying to carve a space for himself.

The designer might not be feeling that way for long. Starting this season, it will be represented by Tomorrow showroom and Jordan outlined plans to take the brand physically to its consumers through a series of pop-up retail locations, naming Los Angeles, Tokyo and London as destinations.