The “Chiara Ferragni — Unposted” documentary is said to be presented on Sept. 4.

FROM SMARTPHONE SCREEN TO SILVER SCREEN: Chiara Ferragni is not new to a red carpet, but the one at the upcoming Venice International Film Festival promises to be extra special for the Italian influencer and entrepreneur.

The 76th edition of the event, running Aug. 28 to Sept. 7, will mark the debut of the docufilm on her life, which has been in the works since last year and intends to mark the 10th anniversary of her The Blonde Salad digital platform.

Named “Chiara Ferragni — Unposted,” the documentary has been included in the “Sconfini” category as part of the official program of festival, which was released on Thursday. The docufilm is due to be presented on Sept. 4.

As expected, Ferragni immediately shared the news with her 17 million followers on Instagram, posting a picture of a past Venice Film Festival red-carpet moment flanked by an extensive caption reading: “GUYS: I’m almost crying for happiness to announce that the docu-film about my life will be presented at the 2019 Venice film festival. Thank you @elisamoruso for directing this film and making my childhood dream come true ❤ I couldn’t be more excited for you to see it!” 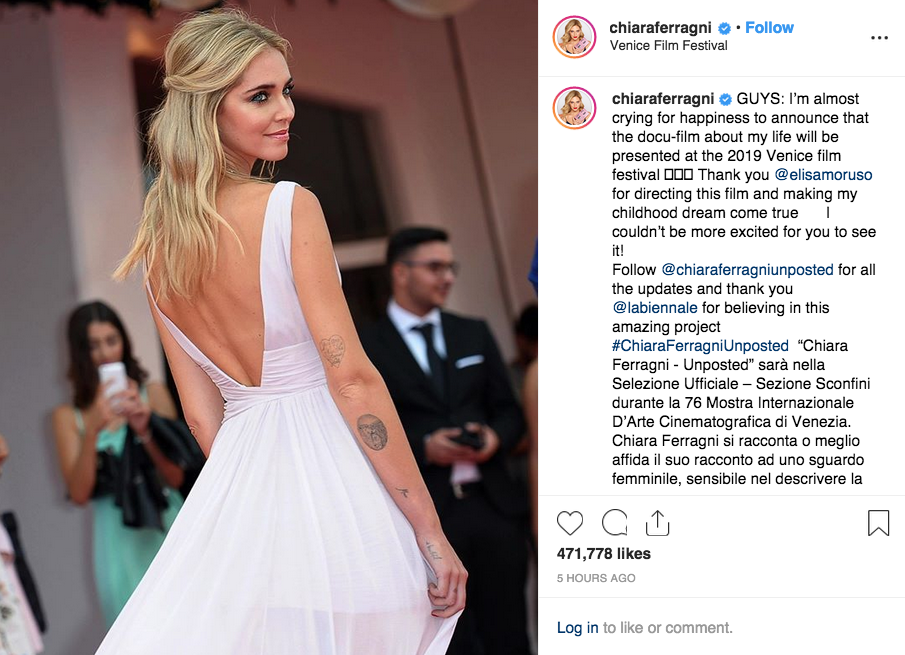 Ferragni posted a series of Insta-stories reiterating her satisfaction with the news and thanking the partners and companies that supported her in the process. “I’m so excited, this is such a huge milestone for my career,” she said in a video.

Directed by Elisa Amoruso, the docufilm will explore the private and professional life of Ferragni, showing the role she played in the disruptive digital revolution that has taken place over the last decade.

As reported, a range of fashion personalities, including Donatella Versace, Diane von Furstenberg and Maria Grazia Chiuri, are said to appear in the documentary, in addition to academic professors, sociologists and some of Ferragni’s followers.

Ferragni started filming the documentary during her wedding in Noto, Sicily, last year. Filming continued after the three-day celebrations, following the influencer during the fashion weeks in New York, Milan, Paris and while visiting her hometown of Cremona.

After hitting Venice, the documentary is due to touch base in Milan to be screened on Sept. 16, on the eve of fashion week.