Chiara Ferragni Gets Into the Christmas Spirit for Printemps

The influencer, entrepreneur and Pomellato ambassador was chosen by the Parisian store to inaugurate its kawaii-themed Christmas windows.

TO TREE OR NOT TO TREE: It might only be November, but the next thing on Chiara Ferragni’s to-do list is resolutely Christmassy.

“All this got me thinking that I really need to put my Christmas tree up at home,” laughed the influencer and entrepreneur, in reference to the twinkling decorations surrounding the Christmas windows of Parisian department store Printemps.

“We usually get one for Dec.1, but last year I was so excited that I put one up on Nov. 15 — which was amazing because for a whole month and a half my house was so full of Christmas decorations, I loved it. The only problem is that it feels so empty when you take them down.”

Ferragni was chosen by Printemps to participate in what has become a Parisian tradition: The unveiling of the department store’s festive display, which this year has a Kawaii theme.

In partnership with Pomellato, for which Ferragni is an ambassador, the windows feature 60 playful articulated puppets in the shape of animals, imagined by Printemps and created by French puppeteer Pantomime. Each window will feature exclusive silhouettes and accessories created by brand partners for the Christmas season and will be on display until Jan. 6.

Minutes before the windows were unveiled to the public, Ferragni, wearing a beige Max Mara suit and Pomellato jewelry, stepped in front of the still-shrouded display, where she was greeted with shrieks emitted by a gaggle of teenage fans eager to take selfies with the Italian social media star.

She was joined by Printemps chief executive officer Paolo de Cesare, Printemps artistic director Franck Banchet and Pomellato general manager for Western Europe Emmanuelle Marque to cut the satin ribbon marking the launch of the Christmas campaign. The group then posed for pictures in front of the Printemps’ main display, a giant model of the building’s historical Art Deco cupola overrun with mischievous mice puppets. 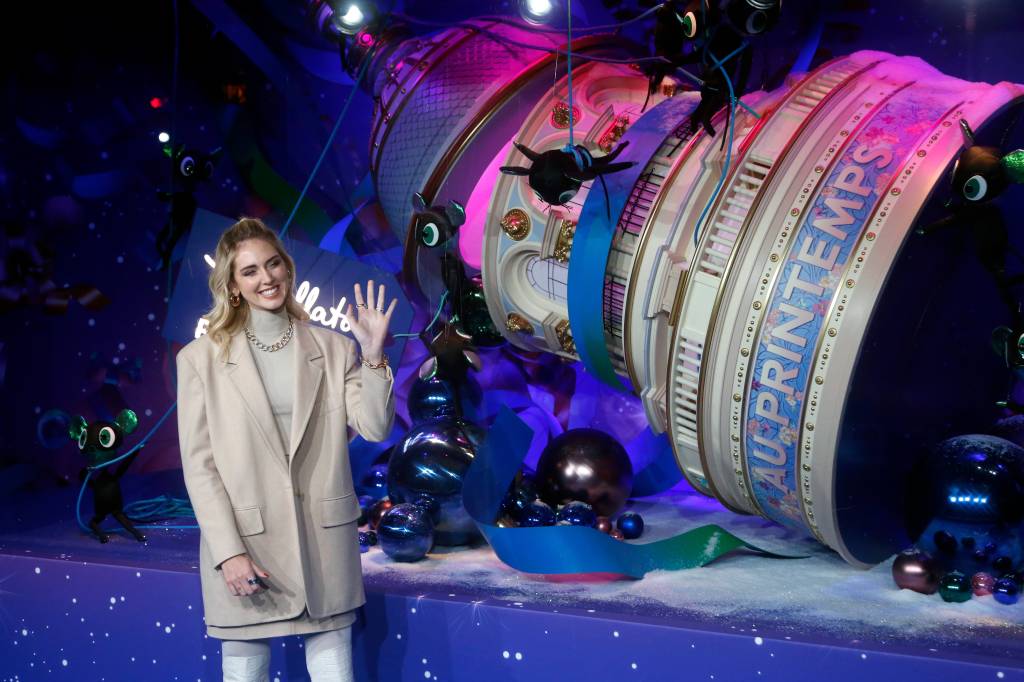 But before she gets fully immersed in the Christmas spirit — like every year, Ferragni plans to spend the holidays skiing in the Italian Alps with her family — the entrepreneur behind The Blonde Salad digital platform and the Chiara Ferragni Collection label has something else to look forward to: Her documentary, “Chiara Ferragni — Unposted,” will start streaming on Amazon Prime on Nov. 29.

“We’re doing a premiere next week in New York, which will be followed by one in Rome, and then the rest of the world will get to see it,” she beamed.

“At the premiere, there was everybody I loved in the same room,” she continued. “Then it was released for three days on Italian screens and 170,000 people saw it. Those three days were amazing, because I was scrolling through my Instagram messages and everybody was writing me such positive things. That was my main goal: To inspire people to do their best, dream big and achieve their goals.”

“He has seen parts of the film, but as he’s only one-and-a-half years old, he gets bored after a while; he prefers cartoons,” said Ferragni, who is married to Italian rapper Federico Lucia, known as Fedez. “But he loves the scenes he is in. At home we spent a lot of time filming him and he loves to watch himself. He is obsessed with himself.”