The actress is giving philanthropy a makeover with the help of designer Yoana Baraschi and Anthropologie. 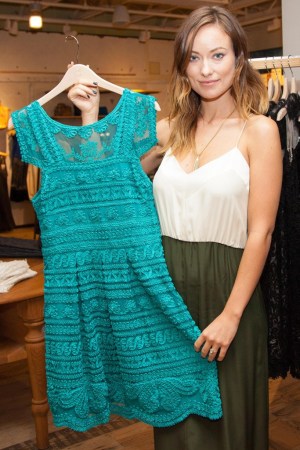 CHIC CHARITY: Olivia Wilde is giving philanthropy a makeover with the help of designer Yoana Baraschi and Anthropologie. On behalf of her charity Conscious Commerce, Wilde tweaked Baraschi’s $298 lace tea dress, squaring off the cap sleeves and tinting it in classic colors of black, pink and turquoise. Since she had worn the pretty piece months earlier to another event, Wilde opted instead to don designs by Holmes & Yang and David Yurman, along with a tiny “J” necklace in honor of her fiancé, Jason Sudeikis, at the Monday launch party in Beverly Hills, where she was joined by actresses Maggie Grace and Dianna Agron. Still, the strategy was to pick what was already a bestseller at Anthropologie to “reach as many consumers as possible,” she said. Anthropologie and Baraschi are donating profits from the sale of the first 1,000 dresses to fund a girls’ school called New Light in Calcutta, India.

This is the second fashion project undertaken by Wilde and Conscious Commerce cofounder Barbara Burchfield. Last year, they teamed with Alternative Apparel to release a messenger bag, whose proceeds benefited a secondary school that Wilde cofounded in Haiti. One more collaboration is slated to arrive for the holidays. “At a time people are spending the most money at retail,” Wilde said, “that’s the opportunity to direct to something that is useful.”