Fashion Controversy in China: How Givenchy, Coach and Versace Are Involved

Spokesmodels Liu Wen, Yang Mi, Guan Xiaotong and Jackson Yee have all distanced themselves from the luxury fashion brands.

Brands such as Givenchy, Coach and Versace have all come under fire recently for marking Hong Kong as its own country on their merchandise and web sites. The brands have been criticized for offending Chinese sovereignty as the Hong Kong protests continue after 10 weeks.

The fashion controversy in China continued in the past week when models Liu Wen and Yang Mi ended their newly-minted contracts with Coach and Versace, respectively. 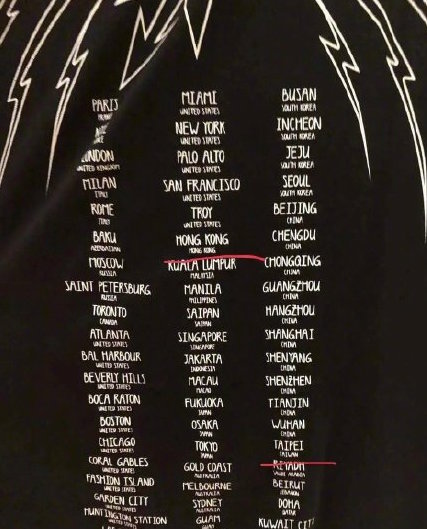 The models’ split from the luxury brands is part of a larger controversial issue surrounding fashion designers and Chinese geopolitics that have caused other Chinese ambassadors to break ties with the brands.

From which models are involved to the brands’ apologies, here is everything you need to know on the fashion controversy in China.

How are Givenchy, Coach and Versace involved in the China fashion controversy?

Coach, Versace and Givenchy have made materials seen as insensitive toward Chinese sovereignty. Each of the brands have released t-shirts that show a list of cities followed by their respective country, however, Hong Kong is listed as its own country instead of as part of China. 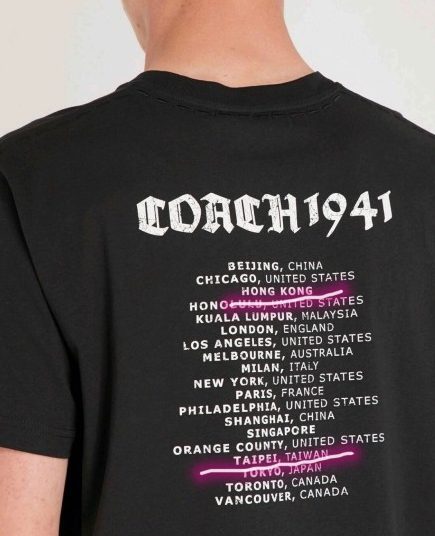 Additionally, on Coach and Givenchy’s t-shirts, Taipei is listed as “Taipei, Taiwan.” On Coach’s web site, the brand also lists a “search by country” option instead of by region.

Why are the T-shirts controversial?

Aside from the ongoing protests in Hong Kong, the shirts can be considered offensive because Hong Kong was formerly ruled by the U.K. for a decade before handing the region back to China in 1997. Hong Kong is regarded as a special administrative region and runs under the “one country, two systems” principle, which allows Hong Kong to have its own legal, economic, governmental and financial affairs. 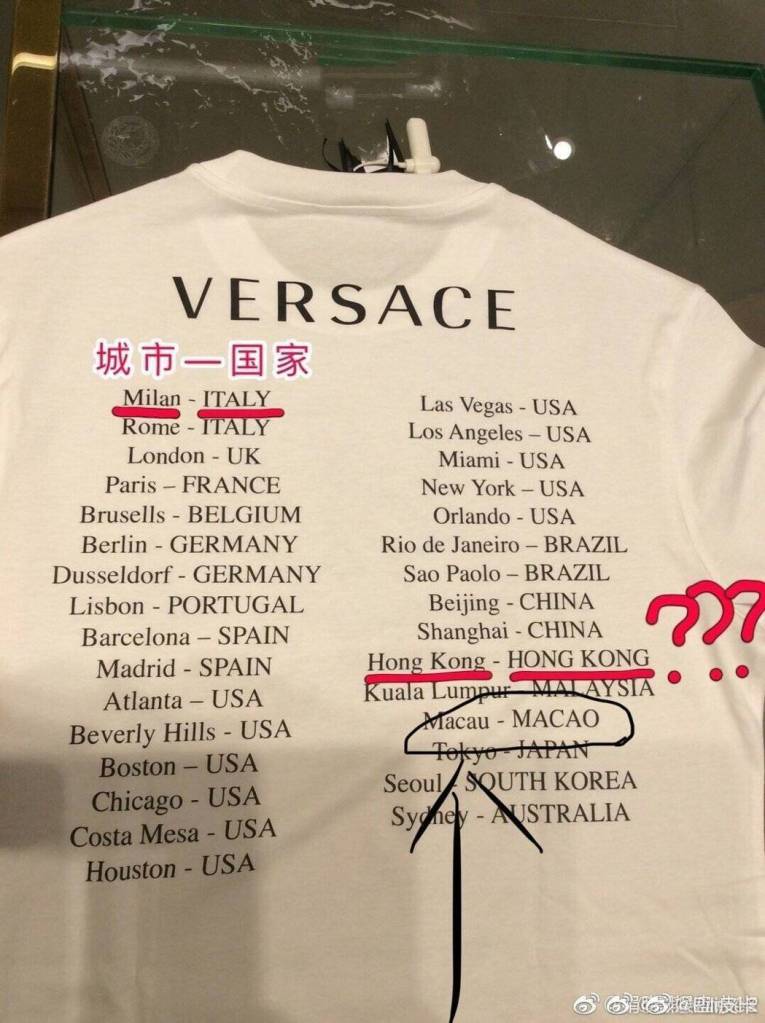 Image of a Versace T-shirt that circulated widely on China’s social media platform Weibo. Many sees it mistakenly list Macau and Hong Kong as separate countries to China.  Weibo

Taiwan, on the other hand, is an autonomous island with Taipei as its capital and is viewed by Beijing as a renegade province.

Models Liu Wen and Yang Mi, actress Guan Xiaotong and musician Jackson Yee have not taken the issue lightly. All four of them have distanced themselves from the brands after the controversy went viral. 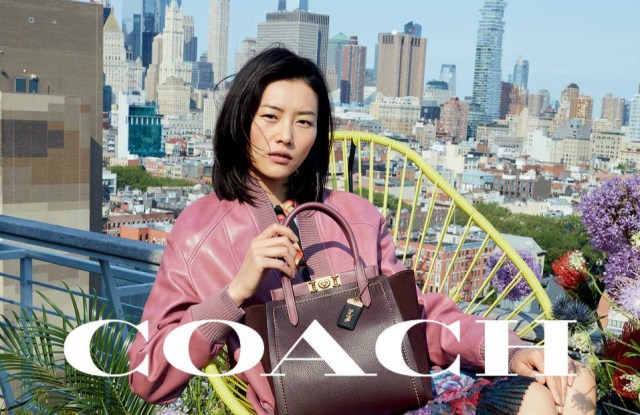 Wen, a 31-year-old Chinese model, has walked on the runways of Marc Jacobs, Paco Rabanne, Max Mara, Anna Sui and the Victoria’s Secret Fashion Show. She’s also starred in an ad campaign for Chanel’s Gabrielle bag. She recently signed on as a brand ambassador for Coach last month.

Mi is a 32-year-old actress and singer who was appointed as Versace’s first China ambassador on June 24. She was previously the face of Michael Kors in China.

Xiaotong is a 21-year-old actress who was tapped for Coach’s spring 2019 campaign.

Jackson Yee, who is part of the popular boyband TFBoys, was tapped as a brand ambassador for Givenchy’s beauty line.

How did the models respond to the controversy?

Wen took to her Weibo account — China’s Twitter — on Aug. 12 to distance herself from Coach, stating: “At all times, China’s sovereignty and territorial integrity must not be violated. Because of the inaccuracy of the brand I chose and the hurt it has brought to everyone, I apologize to everyone here. I passionately love my mother country and safeguard China’s sovereignty.” 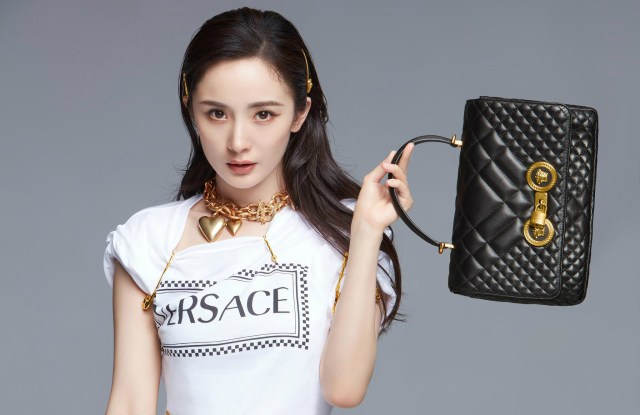 Mi’s studio also put out a statement on Weibo regarding Versace’s t-shirt. “Our company and Ms. Yang found online that ‘some clothing designed by Versace are suspected of damaging China’s national sovereignty and territorial integrity,’” the studio wrote. “’As a company of the People’s Republic of China and Ms. Yang as a citizen of the People’s Republic of China, we feel very angry!”

Xiaotong and Yee have also responded on Weibo, distancing themselves from their respective brands.

How have the brands responded?

Coach immediately responded to Wen’s statement with an apology, stating the brand will do an internal review of its product designs and web site.

“In May 2018, we found that several t-shirt designs had made major mistakes,” the brand said. “We are deeply aware of the seriousness of the problem and took urgent measures to remove the goods from shelves in all channels worldwide. At the same time, we have also conducted a comprehensive review of the products and strengthened the internal process management to prevent similar mistakes from happening again. We apologize for the hurt feelings of consumers.”

Versace also responded on Weibo, stating the t-shirts were wrongly produced and have been removed for sale. “Versace reiterates that we love China and resolutely respect the sovereignty of China’s territorial state,” the brand wrote.

Donatella Versace also took to her Instagram account to apologize further, stating: “I am deeply sorry for the unfortunate recent error that was made by our company and that is being currently discussed on various social media channels. Never have I wanted to disrespect China’s National Sovereignty and this is why I wanted to personally apologize for such inaccuracy and for any distress that it might have caused.”

Givenchy followed suit and posted its own apology on Weibo, stating: “We apologize for the mistake in Givenchy’s printed T-shirts in overseas markets that has aroused discussion among some netizens today. For any human negligence or mistake, we must correct it immediately and take it as a warning. Givenchy always respects China’s sovereignty, firmly upholds the one-China principle and is unswerving.”

Coach Said to Sell on Tmall for Third Time