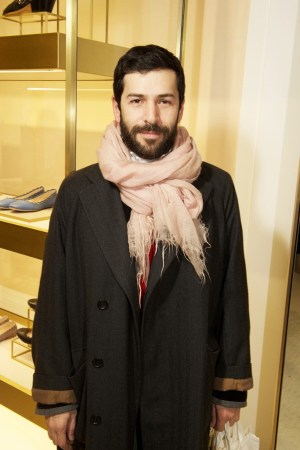 Luxottica Bringing Art to the Streets

HOUSE WARMING: Fashionistas sure love a goody bag. Chloé played with the concept for the couture week opening party for its Paris Rue Saint-Honoré flagship on Wednesday night, creating a fun treasure hunt. Wielding golden keys that came with their invitations, guests were invited to open a series of padlocked white boxes placed around the two-story boutique, each housing a surprise.

Mingling with guests on the store’s second-floor terrace, Chloé creative director Clare Waight Keller said: “The idea was to do something fun and quirky, something that really got everyone excited to go all around the store, get their surprise and really experience the whole place.”

Mission accomplished. Having explored the contents of around half of the chests, designer Alexis Mabille, who looked a little pale around the chops from all the late nights working on his just-presented couture collection, laughed: “I got a candle and a perfume. Then I bumped into some friends and got distracted, but I have many more boxes to open.”

“It’s a very fresh idea and perfect for fashion people,” noted actress Juliette Besson, daughter of French director and producer Luc Besson, who is hoping to get her teeth into her first feature film. “I’m looking for something artistic, and I love Tim Burton,” she hinted. Waiters proffered foie gras and candied ginger, while partygoers thronging outside on the first-floor patio were treated to roasted chestnuts.

Sipping on a dry martini, style icon Sylvie Hoarau, one-half of the Paris-based duo Brigitte, stood admiring the store’s powdery-hued décor. “It’s very delicate and soothing,” said the singer, who fresh from touring is already working on a new album.

Also taking in the space were former Chloé creative director Martine Sitbon and Marc Ascoli, who art directed a large-format coffee-table book for Chloé’s 60th anniversary, penned by British journalist Sarah Mower, which is slated for release in September. “The legacy of images is incredible. It’s so fascinating to see the visual identity of each of the eras,” he said.

Other personalities spotted at the event included Marie-Ange Casta and Paz Vega.