On Monday, she was recognized as a pioneering French fashion figure and decorated as a Chevalier of the Legion of Honor. 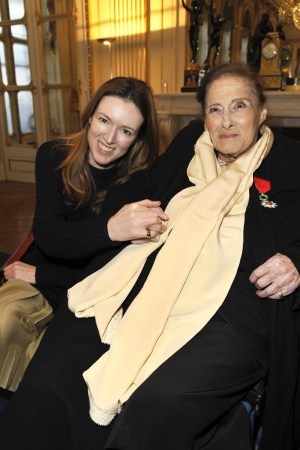 GIRL POWER: At 92, Gaby Aghion is still a Chloé gal: dressed in face-flattering peach silk and as feisty as ever.

On Monday in Paris, she was recognized as a pioneering French fashion figure and decorated as a Chevalier of the Legion of Honor, with French culture and communications minister Aurélie Filippetti pinning the red medal on her dark coat.

“Thanks to you, fashion became accessible,” Filippetti said, recounting how the Egyptian-born designer knocked couture off its “elitist” pedestal and created elegant, audacious fashions for modern women when she launched the label back in 1952.

Chambre Syndicale chief Didier Grumbach, art director Marc Ascoli and a host of Chloé brass turned out to applaud Aghion, who beamed from her wheelchair set next to the podium.

“We regularly have lunch together at her apartment. She speaks to me like a teenager would,” said Chloé chief executive officer Geoffroy de la Bourdonnaye. “She’s sassy and she’s claimed it.”

Clare Waight Keller, the English designer who is now at the creative helm of the 61-year-old brand controlled by luxury group Richemont, was among the first to dive in and congratulate Aghion with a tight hug.