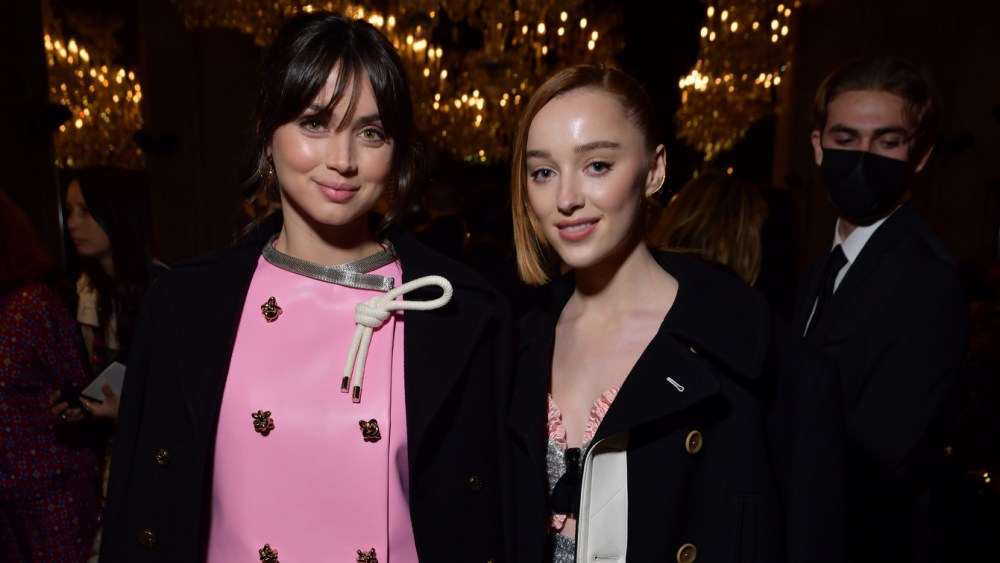 For Ana de Armas, Paris Fashion Week was condensed into a single moment: the Louis Vuitton show at the Louvre, the penultimate runway of the spring season.

“What a time to be alive… Everyone looks so happy and excited, in such a good mood,” said the Cuban actress, as French actress Leila Behkti who was being ushered to her seat, stopped en route to share very French cheek kisses with friends.

The weekend had given de Armas ample reasons for thrills, with “No Time to Die,” the 25th James Bond adventure in which she plays American spook Paloma for Daniel Craig’s final outing as the British spy, made $119 million for its international debut.

Where does one go from such a high? “I think it’s time to enjoy [the moment and not rush through it,” she said, taking her front-row spot near Alicia Vikander, “Bridgerton’s” Phoebe Dynevor and English-French actress Stacy Martin.

For Vikander, the looks on the runway may have felt familiar. The Swedish actress is set to star as Mira, the central character of the HBO limited series “Irma Vep,” directed by Olivier Assayas and inspired by his 1996 French film of the same name — one of the influences of the season.

But Vikander, who is also one of the show’s executive producers, didn’t let any further details slip. “Not before the show,” she said with a Mona Lisa smile.

Martin was feeling the buzz of the room keenly. “It’s nice to come back and feeling the energy, because I’ve been in a completely isolated little pandemic bubble,” said the actress, who spent the past few months filming “I love Greece,” the debut film of 25-year-old director Nafsika Guerry-Karamaounas.

A time during which Martin learned a little Greek but also the zeibekiko, a folk dance traditionally reserved to males that she found “very cathartic. It’s only in the last few years that women have started to take ownership of [it].”

But even with her awareness of “how crazy things are,” she couldn’t have predicted what came next: two protesters taking to the runway to unfurl banners decrying consumption, French President Emmanuel Macron and LVMH Moët Hennessy Louis Vuitton.

Even after a standing ovation for Nicolas Ghesquière concluded the Louis Vuitton spring 2022, the mood felt somewhat subdued.

“We should have mercy on our souls,” commented South African American singer-songwriter Chloe Bailey, whose hit single “Have Mercy” dropped on Sept. 10, as a rainy night, fans and would-be protesters from climate activist groups awaited in the Louvre’s courtyard.