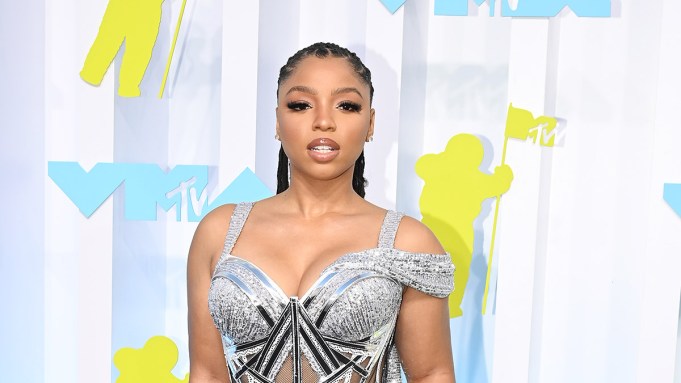 Chloe Bailey continued her experiment with futuristic themes on the red carpet at the MTV Video Music Awards on Sunday in Newark, N.J.

The “Surprise” singer chose a custom Zigman gown covered in silver sequins that included a cutaway corset silhouette with an asymmetrical off-the-shoulder element on one side and a shimmering sarong-shaped skirt.

She coordinated with metallic silver Jimmy Choo sandals that incorporated an ankle strap and oval-designed vamp. Bailey accessorized with a H.Crowne set that included a ring and bracelet.

Jennifer Udechukwu styled Bailey and has worked with Kelly Rowland, Cardi B and Normani. Bailey tapped Udechukwu for past events, including this year’s BET Awards and Essence Festival.

Bailey has been spotted in similar auroral styles such as Area’s Paillette Sculpted Gown from its spring 2022 Haute Couture collection at the Met Gala, styled by Jill Jacobs, and last year’s MTV VMAs, where she wore a silver Marni dress from its spring 2021 collection.

Bailey was nominated in the Best R&B category.