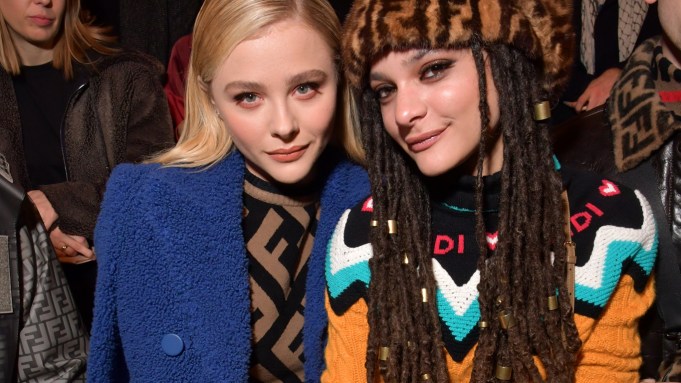 SUSPENSE: Celebrity guests at the Fendi show got a jump-start on the catwalk logo action, donning a variety of clothes and accessories emblazoned with the Italian brand’s trademark double-F emblem. Sasha Lane wore a logo fur beanie, while Sita Abellan piled on the effects with a patterned fur coat, tights, belt, shoes and bag.

Chloë Grace Moretz, meanwhile, went for a relatively subtle logo sweater. The actress said she was looking forward to presenting her next two movies at film festivals this year, though she’ll be skipping the Oscars.

Moretz stars in “The Widow” alongside Isabelle Huppert, and will be seen opposite Tilda Swinton and Dakota Johnson in Oscar-nominated director Luca Guadagnino’s upcoming remake of “Suspiria,” a cult Italian horror movie.

“I can’t speak about anything about it, it’s very under wraps. Even if I did try to explain it, it’s unexplainable. It’s really its own thing. But I can say that I saw the movie recently and I would go as far as to say that he’s our next Stanley Kubrick, and I think he’s the most prolific director of our time,” she said of Guadagnino.

Jamie Campbell Bower was rocking a pair of reflective shades in his capacity as Fendi’s recently appointed eyewear ambassador. “I was fortunate enough to meet Silvia [Venturini Fendi] at the shows and they’ve kind of embraced me into their family, which is wild and amazing,” he said.

The “Twilight” and “Harry Potter” star, who switches between modeling, acting and singing, plans to hit the road in the U.S. soon with his punk rock band Counterfeit, together with his guitarist brother Sam, who also attended the show.

“We go out middle of May and we’re out there for god knows how long, and then we’ll be making a record out in L.A. as well, so we’ll come off the tour and then we’ll stay in America, make the record and come back with a bang,” he said.

Bower said playing with the band holds a special place in his heart. “Music provides an opportunity to be as honest and raw as possible. There’s no veil there at all, I’m not portraying a character, I’m just being me as much as I possibly can be,” he explained.