The brand's creative director Clare Waight Keller mingled with Japanese editors before heading to Hong Kong for a store opening. 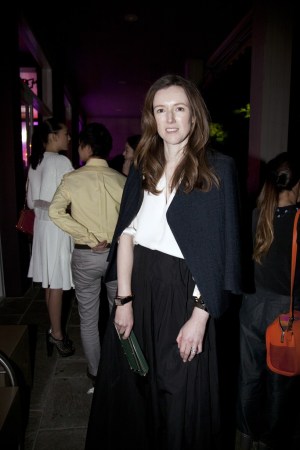 BIRTHDAY BASH: Chloé’s 60th anniversary celebrations made their way to Tokyo Wednesday night. The brand’s creative director Clare Waight Keller and chief executive officer Geoffroy de la Bourdonnaye mingled with a crop of Japanese fashion editors and style-setters at the French ambassador’s residence. A large screen in the garden played footage of runway shows and other highlights from the brand’s past as Japanese actress-singer Mari Natsuki belted out tunes from a nearby stage.

Waight Keller, on her first trip to Japan in about four years, expressed a fondness for the country and its consumers.

“I think the Japanese economy has gone through a rough time but…they’ve always loved buying fashion. I think there’s a really strong market here and certainly it’s reflected in our results so it’s good,” she said, adding that she enjoyed taking in a Sophie Calle exhibition at the Hara Museum of Contemporary Art and touring Shibuya.

De la Bourdonnaye was similarly upbeat about Japan. Although he didn’t disclose sales figures, he said the brand is going well in the country. The French house considers Japan such a critical market that it chose to launch its new skin-care line in Tokyo on Wednesday. “The Japanese love Chloé,” he said. “If we make it in Japan, there’s a good chance that we’ll make it in the world.”

The brand is expanding elsewhere in the region. The Chloé crew is heading to Hong Kong on Thursday to open a 2,690-square-foot store in the Prince’s Building. Last week it opened a 3,229-square-foot store in Shanghai and next month the company will add another boutique in the city’s K11 Art Mall.