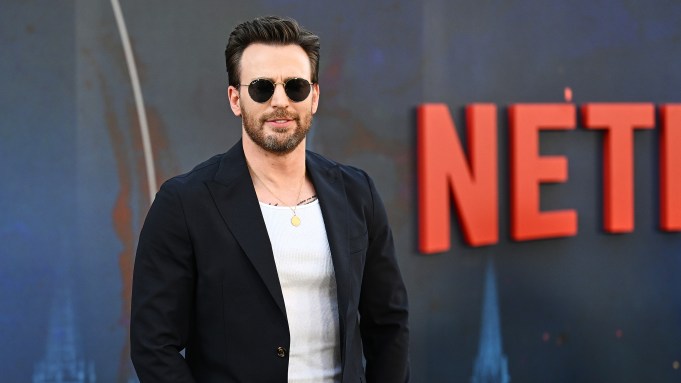 The “Captain America” actor attended the film premiere for Netflix’s “The Gray Man” Wednesday night in Los Angeles wearing a casual suit by Eleventy Milano. Evans walked the red carpet wearing a fitted navy blazer with matching trousers over a white T-shirt. He accessorized the look with a gold medallion necklace and black sunglasses. Evans was styled by his long-time stylist, Ilaria Urbinati.

Evans posed on the red carpet with costars Ana de Armas and Ryan Gosling, who each had their own standout looks with the actress wearing a custom Louis Vuitton metallic gown and the actor wearing a seafoam-colored suit. The film’s stars Regé-Jean Page, Billy Bob Thornton, Michael Gandolfini, Alfre Woodard and others also attended the premiere.

The star-studded film, which debuted Thursday in theaters and will be available to stream on Netflix starting July 22, is an action-packed thriller directed by Anthony and Joe Russo, the directors behind the last two Marvel Studios “Avengers” films. “The Gray Man” tells the story of the CIA’s most skilled, and anonymous, operative who after accidentally uncovering dark agency secrets, has a bounty put on him.

This is Evans’ latest film this summer. Last month, the actor celebrated the release of his Pixar animated movie, “Lightyear,” which is a spin-off from the “Toy Story” franchise focusing on the character Buzz Lightyear.

PHOTOS: See more stars on the red carpet at “The Gray Man” premiere.