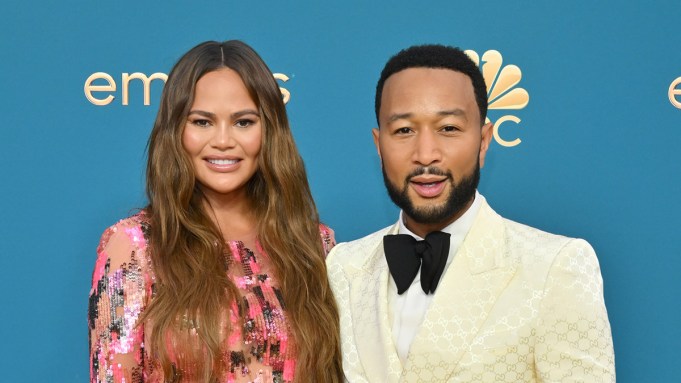 Chrissy Teigen had a shining moment on the Emmy Awards red carpet in a Naeem Khan gown at the Microsoft Theater on Monday in Los Angeles.

Teigen arrived alongside her husband, musician John Legend, in a sequined dress that had scattered patches of nude fabric with shades of pink. The model used the silhouette to showcase her pregnancy by clutching her baby bump, as she’s expecting her third child.

Teigen accessorized with a pink clutch. For beauty, she continued the hue with pale pink nails, a subtle pink lip and rosy blush. Teigen styled her hair in waves, parting it down the middle.

Teigen was styled by Alana Van Dera, who has dressed the model in brands ranging from Tony Ward to Georges Hobeika. Legend, who performed music during the in memoriam presentation, wore a white Gucci suit and black oxfords.