Christian Cowan winks at the past, thanks to retro inspiration from the Razr 5G, and sends his brand forward into a new category — purses.

Hot off of his work with Lil Nas X, Christian Cowan is at it again: On Tuesday, the designer unveiled his latest collaboration, this time with mobile tech company Motorola on a Razr 5G-themed line of purses. The collection represents Cowan’s first foray into the bag category.

“We haven’t released handbags before. It’s such an obvious category that everyone has been asking for,” the designer told WWD. “And it seemed like the perfect opportunity to come up with kind of a really unique, special kind of purse.”

Inspired by the way the Razr 5G flips open, Cowan chose rectangular bags with a flap that flips over the opening. With the belt bag, in particular, he noted that he loves the way the foldable phone can drape over it, as if it’s part of the purse. 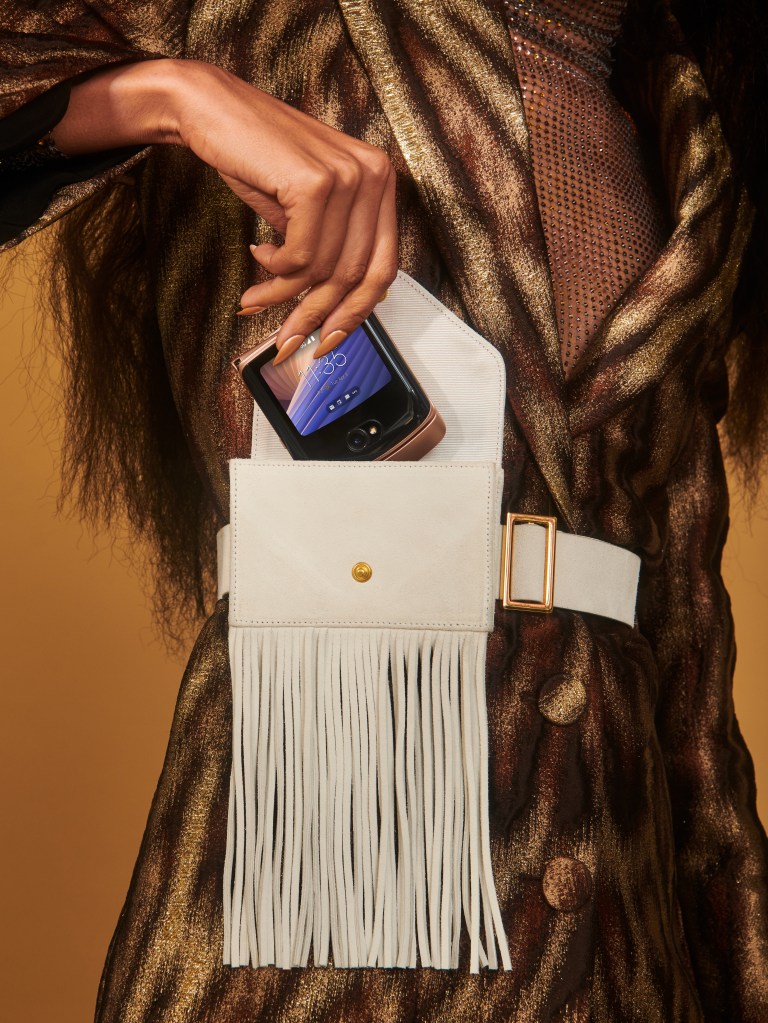 The design elements lean on his penchant for fringe, with an eye on bringing a party vibe. But he made the conscious choice to forego the crystal theme that he’s favored before, going for a more minimalist, sleek aesthetic, accented with gold hardware and chain options.

For Cowan, working on these styles felt fresh and familiar.

“I feel like I’d had such a long relationship with the Razr phone, because I had one when I was a teenager — it was like my favorite thing,” he said. “And now it’s so cool, having that updated Razr, because it’s so fabulous, with a bendy screen and so on…it just felt like me, as a brand.”

Fashion partnerships with mobile tech companies rarely yield products capable of acting as stylish items in their own right. The work typically results in things like special-edition devices swathed in brand imagery, smartphone cases, folios and even luxe smartwatch straps, all of which can scream “tech.”

That would have missed the whole point of what Motorola wanted to convey with its sleek Razr. The folding phone’s biggest selling point is its form factor, and it has been promoted heavily to the fashion crowd, which doesn’t normally go for a gadgety look.

The Razr’s flip bags manage to celebrate the phone, while still having a life and purpose outside of it. One could choose to put a phone in there or not, and still carry them proudly. 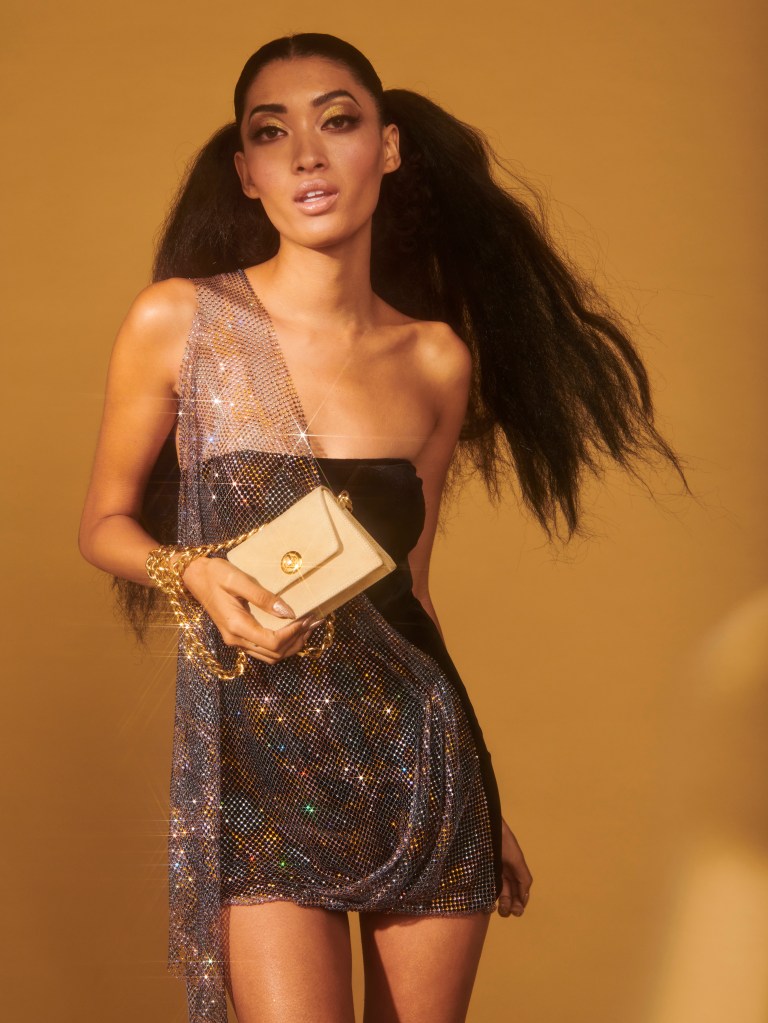 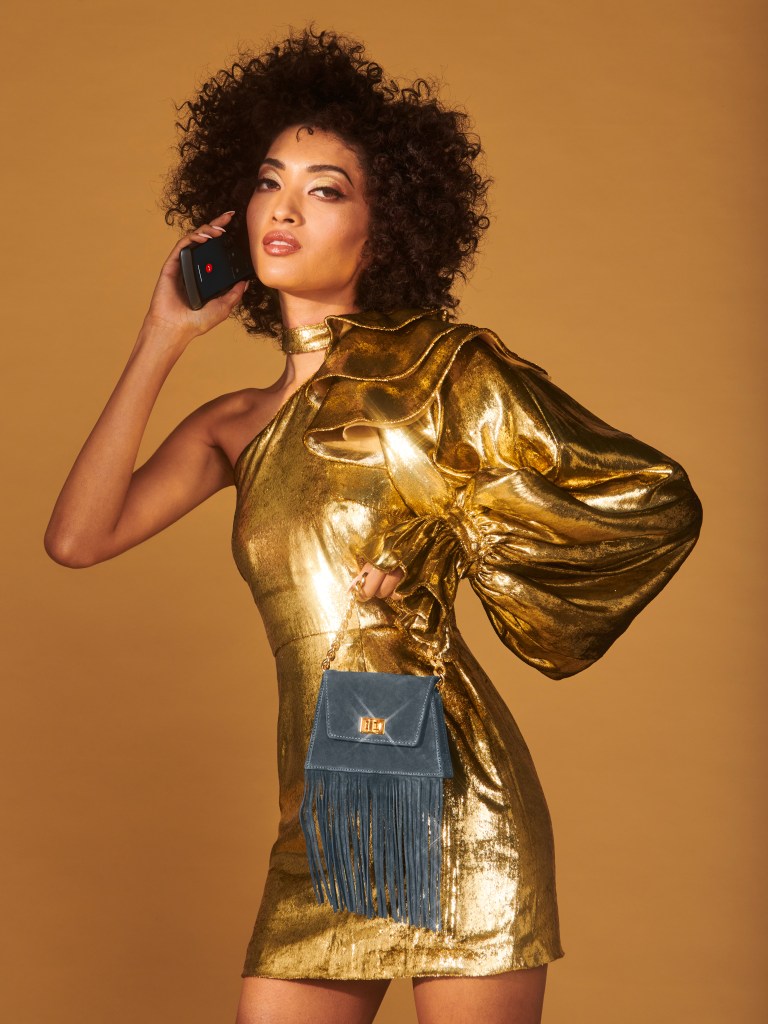 For other designers, that may have been a tough line to walk. But Cowan loves creative challenges — even when it’s tacked on top of other hurdles. Or maybe especially when. For instance, he found the latest New York Fashion Week, which had to be revamped due to coronavirus social-distancing protocols, to be “really refreshing.”

Said Cowan, “It was nice, you know, all of us designers, we’ve been working in the same way over and over again, every fashion week. So it’s nice to have a challenge to work around, and I think some people will almost produce better work because of it.

“For example, I am in the U.K., and I can’t get back into the U.S. because of travel restrictions,” he explained. “So it was like, how do I execute a collection and release a fabulous kind of release without being there? We chose the fashion film route and partnered with Lil Nas, we gave all the money to charity and it just ended up being one of my favorite collections I’ve ever done. And I think it was just because of that creative obstacle that we had to work around.”

The Lil Nas X partnership brought a unisex ready-to-wear collection for spring 2021, in support of Black queer youth in Atlanta. Now, having taken the wraps off his Razr collaboration and entered a new category, Cowan is working on the next big project.

The designer teased “a very special collaboration coming for next season.” But he couldn’t elaborate, saying only that “for me, it was about finding things that are unexpected.”