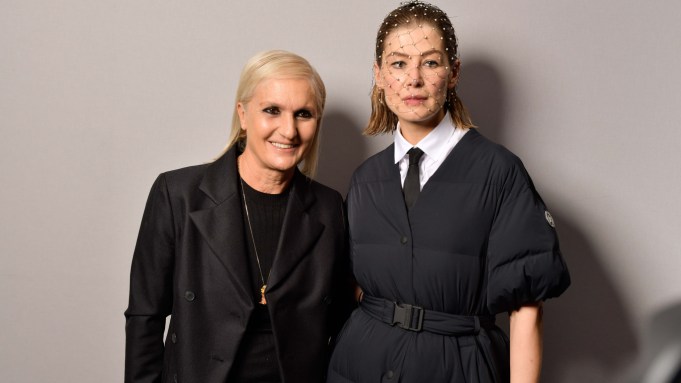 The winter sun that bathed the gardens of the Musée Rodin ahead of the Dior haute couture show was a rare escape for Beatrice Borromeo Casiraghi.

The Italian journalist and Dior ambassador is in the process of editing her next project, a documentary slated for release in the fall. Although she demurred to discuss the subject, promising a reveal in the summer, her previous work has included hard-hitting subjects like children victimized by Mafia-related drug trade.

“Having a moment for beauty and to be together with friends is really nice,” said Borromeo Casiraghi, who had come to the show with fellow ambassador, husband Pierre Casiraghi.

But that was no cause for marital strife among the young royals. On the contrary, his nomination as a face of the French luxury house’s men’s range was another reason for contentment. “We get to spend even more time together, and not just at home because [otherwise] he only sees me dressed for the farm life,” she said.

Jeanne Damas had come without the newest man in her life — her baby son. “I’m no longer at every fashion week but it’s super cool [to be back] after a pandemic and a baby,” said the French “It” girl, who will soon be a regular fixture on the fashion scene once more, as she plans to open a series of stores for her label Rouje, including one in New York.

Claire Foy — sporting a wavy hairstyle; Cara Delevingne, and Camille Rowe were among the other guests who took in the monumental panels based on the works of leading Indian contemporary artists Madhvi and Manu Parekh.

British actress Rosamund Pike, who currently stars in Amazon Original epic fantasy series “The Wheel of Time,” had just enough time to pose in her pearl-studded net veil in front of the striking murals before being ushered into her seat.