The designer conceived floral patterns for the French maker of upscale lingerie, with the first one set to hit stores in July. 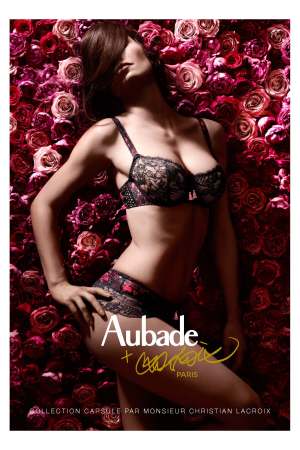 PARIS — Aubade Paris has teamed with Christian Lacroix to reinterpret its Idylle Parisienne line, consisting of nine pieces of lingerie including bras, briefs, a waist cincher and a nightie.

The designer conceived floral patterns to adorn the line, with the first one, called Princesse Impériale, involving almond green, pastel tones and fuchsia, set to hit stores in July, and the second one, Gardenia, in pink and black, in October. Prices range from 60 euros for a tanga brief to 155 euros for a nightie, or $63 to $164 at current exchange rates.

“The starting point for the project was Versailles and Marie-Antoinette,” Lacroix said, noting he didn’t change the shapes; only adornment and print. “We stuck to something classic and historic. We addressed [the print] with a mirror effect to make it modern.”

So there is Leavers lace and a pompom adorning each piece, both signature components of the designer’s baroque style.

Lacroix recalled accompanying his mother to lingerie boutiques as a boy in the Fifties in Arles, France. “The stores had names like Le Corset de Venus, with padding and ribbons inside. How reckless of her [to take me there],” he said with a laugh.

Lacroix had a lingerie line with his namesake couture house that shuttered in 2009. Subsequently, the owners of the Christian Lacroix trademarks mounted a licensing operation following the exit of the founder, entering the women’s innerwear segment in 2011.

For Aubade, French maker of upscale lingerie, the Lacroix project marks its first designer collaboration following a tie-up with Paris’ Crazy Horse cabaret on a capsule collection in 2013.

“We’re working on repositioning the brand. This collaboration is to strengthen the designer and Parisian aspect that we want to accentuate,” said Martina Brown, Aubade’s deputy general manager, who joined the company in October from Wolford AG.

“The average set from the Christian Lacroix line will be priced in line with our upscale Bahia couture range, at around 160 euros [or $169],” added Claire Masson, brand manager at Aubade.

The launch will be backed by visuals shot by Ali Mahdavi, the first ones in color for the brand that has run its racy “Lessons in Seduction” advertising campaigns in black and white for 23 years.

“We want to internationalize the brand. The first step is to adapt our collections to international markets to enter more major department stores worldwide, and the second one will be a shift in our communications. We are working on a new advertising campaign for spring 2017.”

Tapping Mahdavi for the fall 2016 campaign is a first move in that direction, she noted.