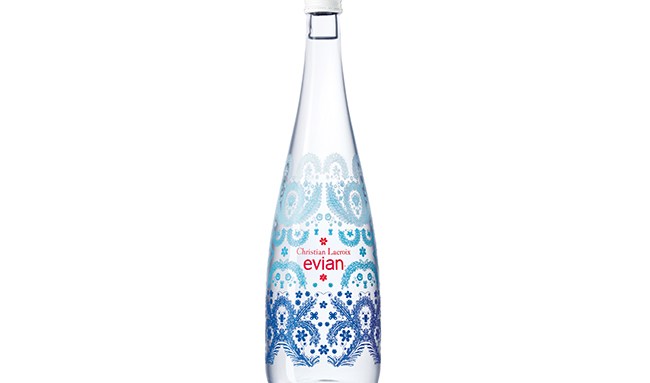 LIQUID ASSETS: Christian Lacroix raised a few eyebrows in France back in 2007 when he became the first couturier to decorate a bottle of water.

But the project with Evian was a hit, shipping millions of limited-edition bottles, popularizing the Lacroix name and aesthetic, and kicking off a decade of other fashionable collaborations with the likes of Jean Paul Gaultier, Elie Saab, Paul Smith, Kenzo and Alexander Wang.

To mark the 10th anniversary of the project, Evian tapped Lacroix for an encore, with 750-ml. bottles and facial sprays slated to arrive hotels, cafés, restaurants and stores from Sept. 6.

Creative director Sacha Walckhoff, who succeeded the founder following the shuttering of the couture house and its transformation into a licensed business, went for blue and pink bottles, symbolizing a gradient horizon at sunrise and sunset respectively.

Reflecting on the project, Lacroix chief executive officer Nicolas Topiol said it “confirmed to us that Lacroix could do iconic designs people relate to” and that people were happy to “grab a piece of the dream” in buying the premium beverage.

Walckhoff revisited a pattern called Paseo that Lacroix used for the red wedding dress that capped his fall 2002 couture show, and famously worn by Madonna in a Steven Klein shoot for W in 2003. Its skirt was based on a bullfighting cape with a pattern mixing swirling garlands, flowers and curlicues.

That print has more recently appeared on a range of handbags, along with home products. “It’s a very flexible design, and it’s always done well,” Topiol said.

Lacroix plans to celebrate the Evian milestone with a party Saturday at its Saint-Sulpice boutique in Paris. The event, which falls during the Maison & Objet trade show, is also an occasion to mark the fifth anniversary of Lacroix’s push into home wares, which now account for roughly half the business.

What started with fabrics has expanded to cushions, wallpapers, carpets, tabletop and furniture, along with such lifestyle products as stationary, phone cases and candles.
The retail value of Lacroix-branded products is estimated at about $200 million.

At Saturday’s event, Topiol and Walckhoff are to unveil a capsule collection of pillows, plates and stationary featuring a print blending tropical plants and buildings.