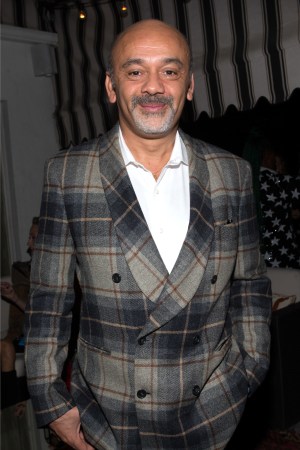 Rosetta Getty and Saks Fifth Avenue welcomed Christian Louboutin to Los Angeles with a cocktail party at Chateau Marmont on Monday night. “I love L.A. I never have a problem coming here, apart from the jet lag,” said Louboutin, who also attended Saturday’s LACMA Art + Film Gala. The event, held for customers in celebration of Louboutin’s maroquinerie collection, also featured a tote tagged by the designer with the phrase “No Selfies.”

“I don’t like selfies,” he said. “You always look ugly in selfies. It’s not flattering because when other people are taking a selfie they end up just looking at themselves so you always end up being a toy. I’m old school. I like to have someone take my picture.”

To that end, Louboutin obliged many fans by posing for endless group shots taken by one of his staffers. Getty said she was happy with the turnout.

“I did this because Christian is such a sweetheart. How could I say no? He loves to talk to the ladies,” she said.

Among other guests in the mix were stylists Erica Pelosini and Joseph Cassell.