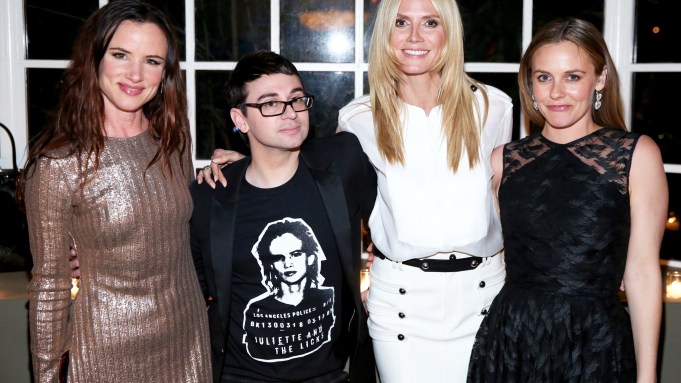 Christian Siriano continues his journey from reality show winner to brand name. The designer is in Hollywood this week to dress several Oscars-bound or Oscar-party-going clients, and to multitask on his ever-expanding business empire. On Monday night, he hit Chateau Marmont to celebrate the launch if his namesake handbag line with friends Heidi Klum (whom he met when he won “Project Runway nearly 10 years ago), Kelly Osbourne, Alicia Silverstone, Juliette Lewis, Kristen Johnson, Kate Flannery and Nia Vardalos.

The nine styles, which come in a variety of sizes, are crafted from non-leather materials and range from day to office to evening. Available on Farfetch.com, Bloomingdale’s e-commerce site and Siriano’s own Web site, the collection retails from $98 to $350.

Approaching his business’ decade anniversary, Siriano juggles several balls, including his recently opened store in New York’s NoLiTa, induction into the Council of Fashion Designers of America, and upcoming line for Lane Bryant. His shoe collection for Payless is ongoing.

“We keep pretty busy,” he said of his 25-person company. While Neiman Marcus is his biggest account for his signature clothing line, he has opened specialty store accounts in Russia, China and the Middle East. “That’s actually what jumped off the bag line, wanting to give retailers overseas something at a more accessible price point,” he said.

This week, Siriano is also putting the final touches on his Oscar gown for E! host Maria Menounos and several other Oscar-partygoers. “Hopefully we’ll have an Oscar moment but you literally never know until the last-minute,” he said. Last year Solange wore his caped pantsuit to an Oscar party.

“My line fits a wide range of women from Sarah Hyland to Oprah and it’s the same way for customers, they are now from all over and all different sizes and ages,” he said. At least with bags, size is not an issue. “Bags fit everyone. I don’t want to hear it’s too long, it’s too short, when it comes to a bag.”