The Belgian designer is merging his pre-collection and core collection into one great collection — in two parts. 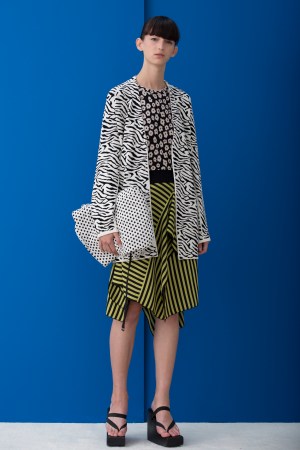 EARLY BIRD: Everyone is groping around when it comes to the fashion calendar.

While ready-to-wear label Vetements is to send out its spring 2017 collection on Sunday during couture week, Christian Wijnants, too, is fine-tuning strategy.

The Belgian designer is merging its pre-collection and core collection into one — in two parts. “We worked for two-and-a-half years with four collections per year. I was tired of having so many [collections.] I think it’s confusing for the clients, too,” he said.

The designer is to continue with four drops a year, but will incorporate his pre-collection into his show during Paris Fashion Week. “The concept of pre-collection is relevant: It’s good to have new merchandise every three months,” said the designer.

“Pre-collections often sell better than the core collection. For many designers, they represent up to 70 percent of their turnover,” said Wijnants who, for his part, generates almost half of his sales with his pre-collections.

With that in mind, they don’t get the exposure they deserve by simply being featured in a look book and should get a nicer play by being part of a show, according to the designer. While he thinks a show in October is always a good idea, he argued that it comes at the end of the season when buyers often have already spent their budgets.

So he started previewing around 150 pieces — some will be in his October show — to buyers at a Paris showroom on 11 Rue des Blancs Manteaux in the Marais district last week, before they travel to other showrooms, including in London, New York and Tokyo.

The spring 2017 collection reflects the tweak in his strategy. There are more between-seasons pieces (with jacquards, alpaca and fabrics for spring — knitwear is a Wijnants specialty; he won the International Woolmark prize in 2013) and themes in common between the two parts of the collection for more consistency. “We did a lot of balloon pieces, to give roundness. It will be even more pronounced in the next drop, with more summery fabrics,” he explained.

For spring 2017, the designer favors graphic looks mixing polka dots and stripes in different directions. Among the highlights are the jackets with flocked stripes that come in rose and black, or khaki and black.

Wijnants plans to open a pop-up store in Tokyo this fall, following a pop-up in Hong Kong. The label counts one standalone boutique in Antwerp, Belgium and around 100 doors worldwide.