The June 9 sale will include more valuable pieces than is typical, including the largest fancy intense blue diamond ever auctioned. 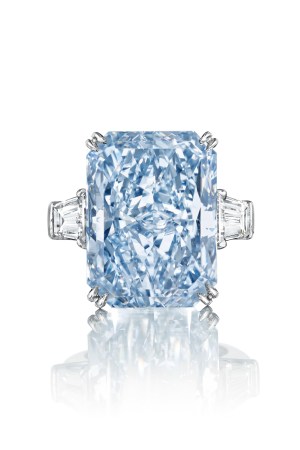 Christie’s is changing the modus operandi of its June jewelry sale in New York. While typically heralded as an “Important Jewels” sale, this year the auction house has upped the ante — labeling the June installment as a “Magnificent Jewels” sale, which it says is the byproduct of a globalizing jewelry trade.

The June 9 sale is estimated to bring between $35 million and $45 million. By contrast, last year’s June sale realized just over $27.5 million.

Christie’s international jewelry director Tom Burstein said that the switch is “property-driven.” This sale, for instance, includes “The Cullinan Dream” — the largest fancy intense blue diamond ever offered at auction.

“Over the last few years [jewelry] has become such an international market and a market that operates 365 days a year, without distinct seasons — if the property is right it can now be offered at any time of year,” he said. “Five, six, seven years ago we would have said ‘let’s hold off [on more valuable pieces] for fall.’”

High-wattage jewelry bidders no longer feel restricted to bidding on lots sold in their local regions — a trend that Burstein says has been mounting in the last “five years.” As such, “June gives us an advantage — we were able to bring the highlights [from this New York sale] to Geneva, where they were on view at our exhibition last week, and then they traveled to Hong Kong and went on view there. It’s a really great opportunity to captivate clients in their home base,” he said.

Burstein attributed the shift toward globalized bidding to advances in technology. “Twenty years ago it was a big deal if we had a telephone bid that someone had called in from a private plane. Now there are so many ways a client has access to bidding — it makes it a lot easier. They can literally be on their smart phone and doing it,” he said.

The June Magnificent Jewels sale will be led by the Cullinan Dream diamond — a fancy intense blue stone weighing 24.18 carats. It is estimated to bring between $23 million and $29 million.

The stone was pulled from South Africa’s Cullinan mine in 2014 — making its auction buyer “the stone’s first primary individual owner,” said Burstein. “It would be the first step in its history.”

The Cullinan Dream was cut from a 122.52-carat rough blue diamond stone — which ultimately yielded four individual pieces ranging in weight from 7 to 24.18 carats.

The lot’s origin mine also yielded The Star of Africa, a 3,106.75-carat rough diamond that was cut to become the largest polished white diamond in history.