On April 14, Christie’s will place more than 300 precious jewelry lots under the gavel for its spring Magnificent Jewels sale. 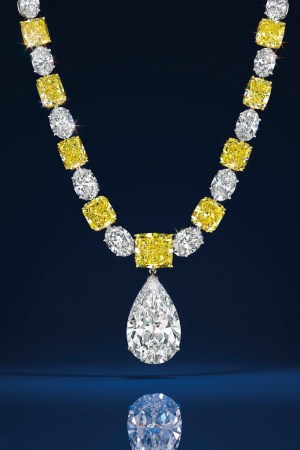 ICE ON THE BLOCK: On April 14, Christie’s will place more than 300 precious jewelry lots under the gavel for its spring Magnificent Jewels sale. The auction is estimated to generate sales of more than $40 million. Among its top lots is an 80.73 carat cushion-cut diamond, expected to fetch between $4 million and $5 million. A four-strand natural black pearl necklace, strung with spheres that measure up to 12.65 millimeters in diameter, is estimated to sell for between $3.8 million and $4.5 million. Lots by jewelry houses including Graff, JAR, Van Cleef & Arpels and Harry Winston are expected to bring in up to $2 million apiece.

This story first appeared in the March 25, 2015 issue of WWD. Subscribe Today.

Society buff paddle-holders may be interested in a ruby, sapphire and diamond enamel brooch originally worn by the Thirties fashion plate and Standard Oil heiress Millicent Rogers. The Paul Flato design — fabricated in a heart shape with an arrow running through it — is estimated at between $350,000 and $500,000.