More game-worn Air Jordan sneakers are going on the auction block this month.

From July 30 through Aug. 13, Stadium Goods and Christie’s are hosting an online sale of rare footwear and memorabilia titled “Original Air: A Sale of Michael Jordan Game-Worn and Player Exclusive Sneaker Rarities.” A portion of the proceeds from the sale will go to the NAACP Legal Defense Fund, which both Christie’s America and Stadium Goods had made corporate gifts to earlier this year.

The sale includes 11 lots of one-of-a-kind historically significant Air Jordan sneakers from NBA star Michael Jordan’s years competing on the Chicago Bulls. Some models include the Nike Air Ship, the shoe Jordan played in before the introduction of the Air Jordan line, Air Jordan VII sneakers designed for the 1992 Summer Olympics in Barcelona, and a white-and-red colorway of the Air Jordan XIV that Jordan wore in practice during the NBA Finals in 1998 that is estimated to sell for between $6,000 and $8,000.

“He wore the black-and-red ‘Bred’ version of the Jordan 14 during the Finals games, but in practice, between games, he wore this very pair of the white-and-red colorway,” said Stadium Goods brand director Ben Jacobs. 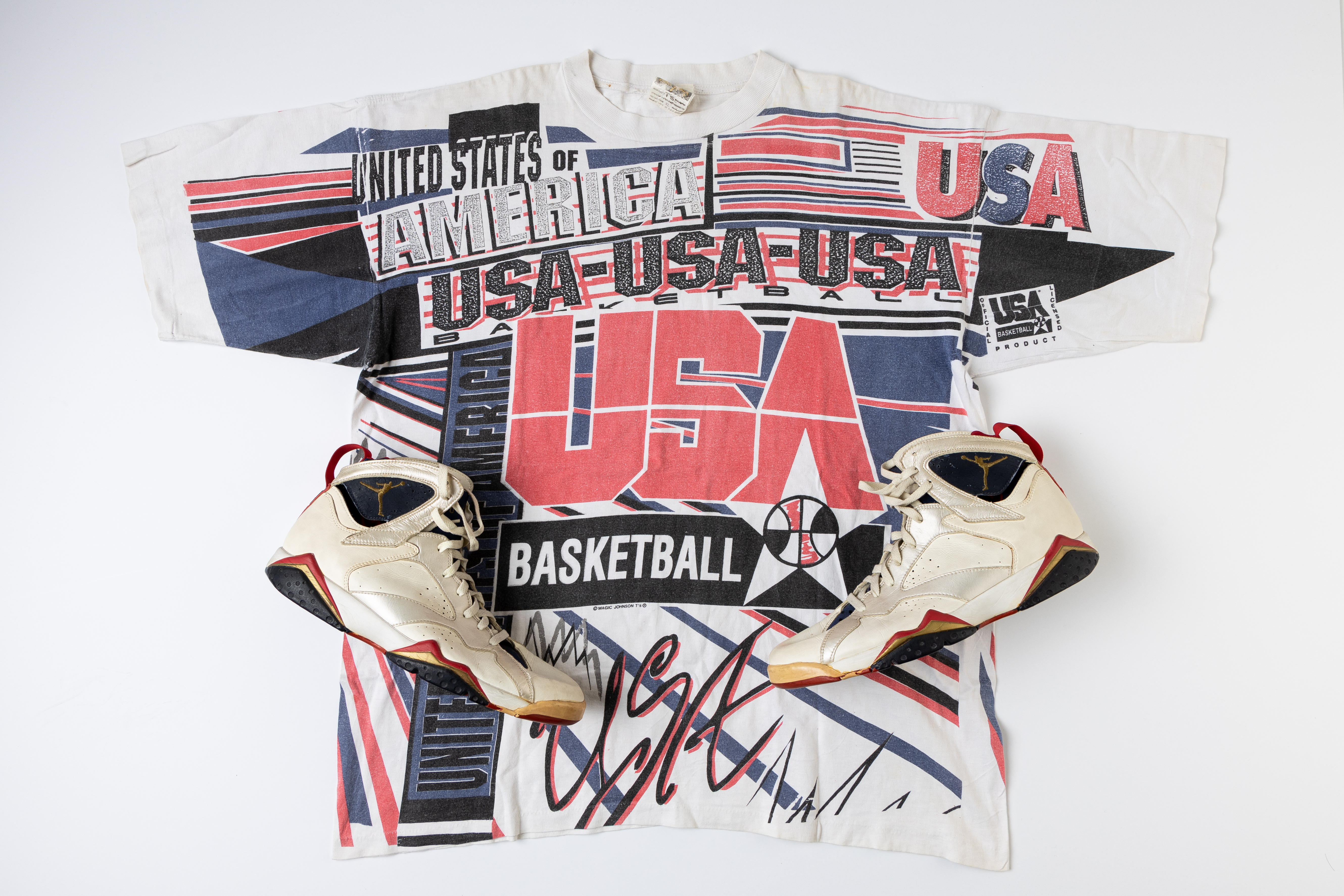 Caitlin Donovan, vice president/specialist for Christie’s Luxury, added, “While sneakers have been on our radar for years, we were waiting for the perfect storm of the right strategic partner, curation of property and aptitude in the marketplace. With sports largely canceled this season, we recognized their ever-increasing importance in art and culture, and wanted to create a series of sales paying homage to the world of sport and the greatest athletes of all time.”

Stadium Goods cofounder and co-chief executive officer John McPheters said, “Michael Jordan’s tremendous impact on basketball and sneakers is universally acknowledged, and it can be easy to think there aren’t any new stories to add to the legend. But as we’ve seen with ‘The Last Dance’ and now with our ‘Original Air’ auction with Christie’s, there are still lesser-known narratives in the legacy that create great interest. The pieces we’ve put together for this auction are truly unique, and will have deep resonance for Jordan fans, sneaker connoisseurs and pop culture collectors alike.”

In addition, Christie’s is holding two separate online sales of artworks. The first, “The Athlete: Photographs by Walter looss Jr.” from July 23 through Aug. 11, is comprised of 39 vintage photographic prints of famed basketball, football and baseball stars from the Sixties through the Nineties, including “Michael Jordan ‘The Blue Dunk,’ Lisle IL, 1987.” The second, “For Love of the Game,” from July 20 through Aug. 14, features artworks of athletes by George Bellows, Jonas Wood and Andy Warhol, among others.

“Walter Iooss Jr. has photographed thousands of athletes, including the most iconic stars in the biggest arenas under the brightest lights,” Donovan said. “His unrivaled ability to get the shot — a skill that has made him a legend among those he has photographed — has allowed him unparalleled access to the inner sanctum of club houses, team planes and the homes of many athletes. He has gained the trust and admiration of many, including Michael Jordan, who collaborated with him on his book ‘Rare Air.’ While Walter’s relationship with Michael is significant, there is also a deep connection between sports photography and sneaker collecting, as many collectors look to sports photography to authenticate game-worn sneakers.”

The full catalogue for the “Original Air” online sale will be available for view on July 23, and an exhibition will be open to the public by appointment from July 23 through Aug. 13.