The "Mad Men" actress was among the guests celebrating the opening of the new store in Paris. 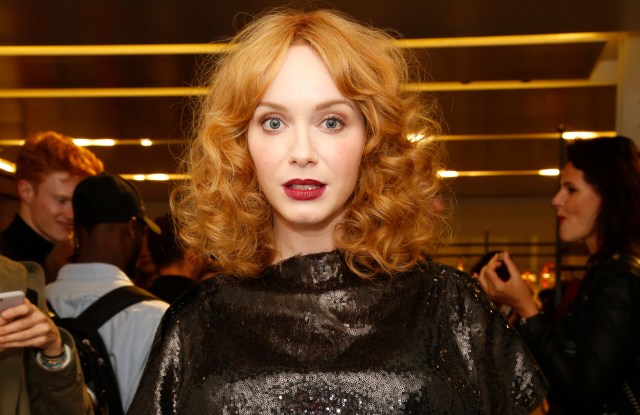 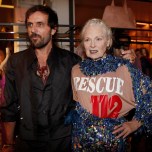 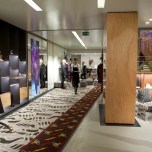 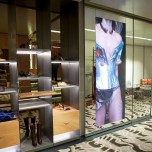 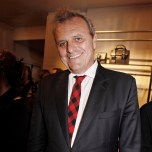 BRITISH ACCENT: After attending the Andreas Kronthaler for Vivienne Westwood show this weekend, Christina Hendricks turned out to celebrate the opening of the first Vivienne Westwood boutique in Paris, located at 175 Rue Saint-Honoré.

In addition to filming “Crooked House” in the U.K. with Glenn Close, the “Mad Men” actress is working on a British television show “Tin Star” with Tim Roth that’s shot is Calgary, Canada. “I am based in Los Angeles and New York but working in Canada so I am a real gypsy now,” said the actress, wearing a Vivienne Westwood black dress with sequins. “Maybe a fancy gypsy,” she added with a laugh while turning her dress.

“It has been a dream of mine for 25 years to have a store in Paris,” said Kronthaler.

The two-story 1,200-square-foot boutique features raw and natural materials such as resin, iron and plywood, and stocks the brand’s ready-to-wear lines: Andreas Kronthaler for Vivienne Westwood, Vivienne Westwood, Anglomania, as well as all accessory lines, alongside bridal and eveningwear.

“I wanted it to be a bit rough-looking so it’s all not very finished because I think nowadays you don’t need to have these highly lost overproductions anymore,” he said.

Up next, the label is to open later this month a flagship in New York, located on Fifth Avenue and 56th Street. “It’s a whole building, with a showroom,” said Kronthaler. It will mark a second store stateside after Melrose Avenue in Los Angeles, for the label that counts dozen stores worldwide.

It felt a bit too hot at the crowded party for some guests including Westwood who was getting some fresher air on the store’s back stairs and Jean-Charles de Castelbajac, who gave Westwood his new book “Fashion, Art & Rock’n’Roll.”

“It’s a little bit like in London’s nightclubs: I kind of like that,” said the actress and singer Joana Preiss.