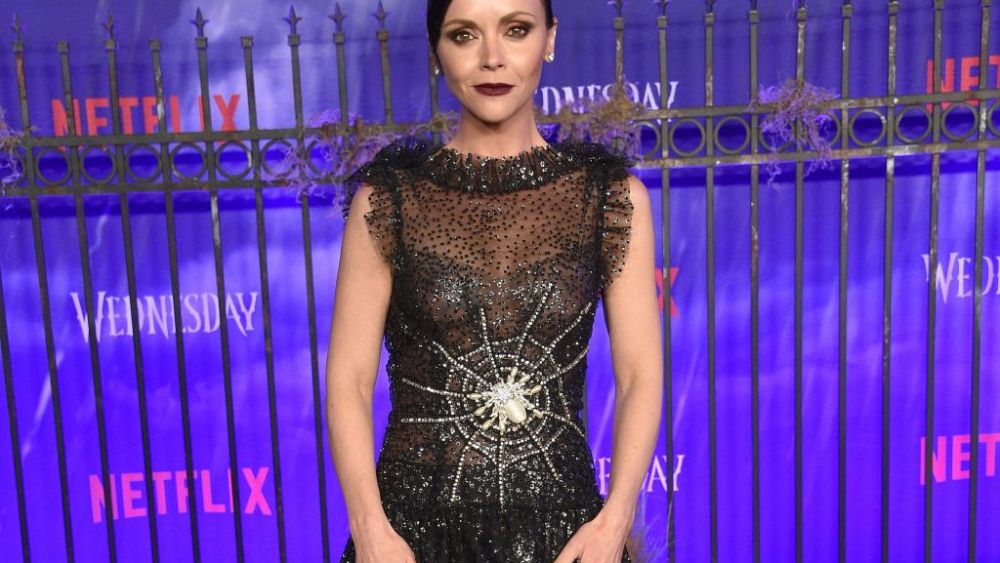 In honor of the premiere of her new television show, where Ricci stars alongside Jenna Ortega, who plays the title character, the actress wore a sleeveless black gown with a sheer bodice, ruffle trims around the neckline and shoulders, a tiered skirt and a spiderweb pattern embroidered into the bodice.

The actress worked with stylist Alexandra Mandelkorn to create her look for the premiere. Mandelkorn also works with Janelle Monáe, Rachel Brosnahan and Sarah Flint.

For makeup, Ricci tapped Allan Avendaño for an evening-ready look, including a dark burgundy lip, contour, light red eye shadow, cat-eye eyeliner and eye-popping mascara. Hairstylist Mark Hampton parted her hair to one side, slicked it down and did the back in a small tight bun.

Ricci’s red carpet appearance for “Wednesday” marked the second time she has sported Rodarte for an event this month. During the CFDA Fashion Awards, the actress wore a botanical motif dress with metallic floral embellishments from the brand.

“Wednesday” tells the story of the beloved Addams Family character Wednesday Addams, the young psychic daughter of the family. In addition to Ricci and Ortega, the series also stars Luis Guzman, Catherine Zeta-Jones, Isaac Ordonez and George Burcea. The series debuts on Netflix on Nov. 23.