Christmas Trees Go Under The Hammer 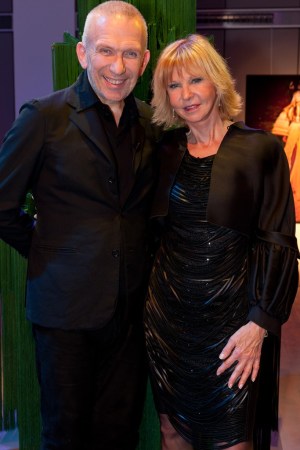 BRANCHING OUT: Jean Paul Gaultier grabbed two handfuls of silky green fringe — instead of prickly pine needles — on Monday night in Paris as he posed with the Christmas tree he designed for the 16th annual charity benefit hosted by Paris fashion journalist Marie-Christiane Marek.

The trees, interpreted by an eclectic cast of designers and brands — including Christian Dior, Louis Vuitton, Trussardi and Sonia Rykiel — were sold at auction and raised more than 70,000 euros, or $94,000 at current exchange rates, for cancer research.

Marek coaxed yet more donations from the crowd gathered at the sumptuous Hôtel Salmon de Rothschild by selling tickets to win a small gold ingot, signed by Gaultier and fresh from the mint.

Gaultier, who arrived with Farida Khelfa on his arm, was raving about another Jean-Paul — Goude — whose retrospective at Les Arts Decoratifs had him transfixed for hours. He also was recently in Berlin for the first time in years and marveled that “East Berlin now looks better than West Berlin.”

Among the most enthusiastic bidders at the auction were the folks from Messe Frankfurt, who plan to display their newly acquired designer trees at the next edition of Christmasworld, its giant festive decoration fair scheduled for Jan. 27 to 31.