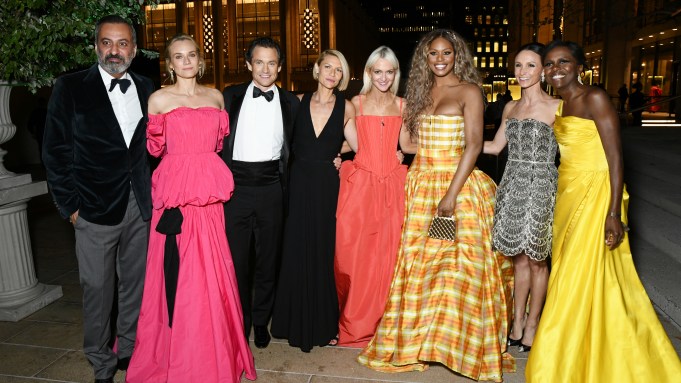 The curtains went up and out came a procession of what Christopher John Rogers proclaimed as a cast of “Teletubbies” at the New York City Ballet’s Fall Fashion Gala.

The designer, as well as Esteban Cortázar, each devised costumes for new choreographic works — which had their world premieres on Thursday night as part of the ninth annual fashion gala. The evening came a little more than a week after City Ballet lifted the curtain for its first performance since the pandemic’s start.

“I just ultimately feel very humbled to be chosen to help represent this moment of hopefully coming out of such an usual past few years. They were trying to go for an optimistic feel with the performance tonight and I feel very lucky to be a part of that,” said Rogers, who was also marking his first night at the ballet last evening.

The designer was paired with Sidra Bell, the first Black female choreographer commissioned by the company, who ultimately created a contemporary ballet she titled, “Suspended Animation.”

For the occasion, Rogers looked to surrealist works by Oskar Schlemmer — whose whirly-top Bauhaus-era ballet costumes emboldened him to take risks with silhouette and color. A rainbow of neon colors and voluminous, over-the-top shapes ultimately pushed Rogers to discover new balance within his design capabilities.

“[The process took] a few months, but it feels like we only had a few weeks to do everything. A lot of my work lives in this liminal space between high-octane glamour and straightforward pragmatism, and I felt like working with the dancers stretched both things to the extreme. You need things that take up space onstage but that the dancers can move in. The experience was really great,” Rogers said of his time working with City Ballet’s costume shop.

There, his designs were facilitated by the company’s in-house seamstresses — all of whom are overseen by NYCB costume director Marc Happel. After more than a year-and-a-half away from City Ballet’s costume shop, Happel and staff returned to get to work on Rogers’ and Cortázar’s designs.

“We came back to the fact that calendar still said March 2020; I had a coffee cup on my desk that was totally dried up, several plants have died — so there was a lot of that — but we also came back and just started because we had to. Like many things, you get back on the bicycle,” Happel said of the costume staff’s return.

In addition to celebrity attendees like Laverne Cox, Claire Danes and Diane Kruger, sitting in the audience was former New York City mayor and presidential hopeful Michael Bloomberg — who seemed more excited to participate in the performing arts than the evening’s fashion quotient.

“I’m just in an old tuxedo,” Bloomberg said, declining to reveal his outfit’s vintage. “It’s great to get everyone back — as soon as you get a couple going, everyone will follow, so it’s great that the ballet has the guts to go out and do it. New York is going to come back and is already coming back very rapidly. New York and London have a raison d’être that no other cities have and people will come out and go to restaurants, go to the theater, the ballet and the opera.”