Christopher Kane unveiled his first full collection of leather goods on Monday at his fall/winter runway show in London. 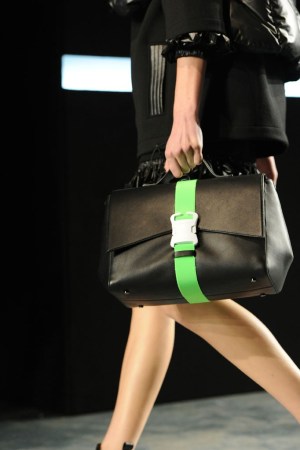 BUCKLING DOWN: Christopher Kane unveiled his first full collection of leather goods on Monday at his fall/winter runway show in London. There are eight new styles, made in Italy from materials including calfskin, alligator, and python. The bags feature Kane’s double “safety buckle” fastening, a detail that appeared in his first collection in 2007. Kane’s pencil case clutch, which has been sold before, is also part of the collection.

Kane said it was important that his first leather goods line “reflect where the Christopher Kane collections began. The safety buckle is a motif from that [spring-summer 2007] collection, and is something I like to return to, as are the oversized, plastic zips.”