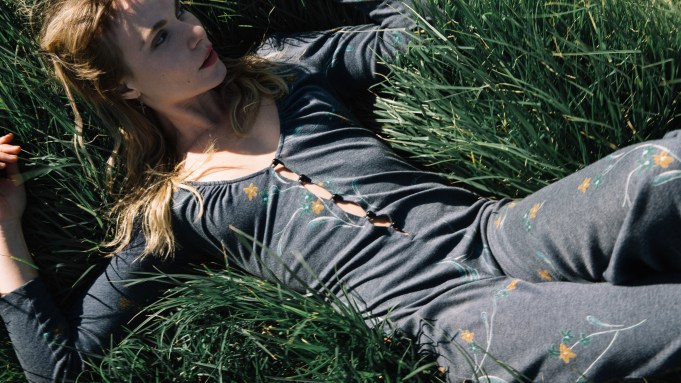 MUSIC MATCH: In what could only be described in fashion terms as a dream collaboration, or in marketing terms as the ultimate synergy, Los Angeles-based model and dress designer Christy Dawn Petersen has collaborated with Angeleno native and hipster singer Z Berg of the band Phases, on two festival fashion-ready pieces, going on sale Wednesday, just in time for the Coachella Valley Music and Arts Festival outfit shopping season. Phases will also be making its Coachella debut on April 15.

Petersen and Berg met when Petersen’s husband, fashion entrepreneur and Odd Us band frontman Aras Baskauskas, recorded an album with Berg’s father, record producer Tony Berg. “We became friends and Z said to me, ‘Hey, you want to make some cool s–t? A dress and maybe a jumper?’” said Petersen.

A vintage swim coverup of Berg’s was the inspiration for the cotton baby-doll dress “Z Dress” which comes in five deadstock fabrics for a total of 50 pieces priced at $191 each. The Z jumper comes in three fabrics and retails for $197. Both will be sold at Petersen’s year-old Christy Dawn boutique on up-and-coming Lincoln Boulevard in Venice Beach, as well as her e-commerce site (Christy Dawn, a Made in L.A. label that Petersen founded two years ago, also wholesales in Free People). “Z really likes to wear short sexy dresses onstage and I’m the opposite, so the pieces reflect both our tastes,” said Petersen.

She’s used to designing with her friends; Christy Dawn has also produced collabs with with Petersen’s friend and fellow model Emily Ratajkowski and actress Langley Fox Hemingway. The latter also appeared in the video for Berg’s single “Cooler,” in which Berg, Petersen and Hemingway went on a road trip to Big Sur (the campaign shots shown here were taken on the shoot).

In a perfect end note, Berg will be performing a private acoustic set to celebrate the design project on April 7 at Superba, the hotspot eatery located down the street from the Christy Dawn store.