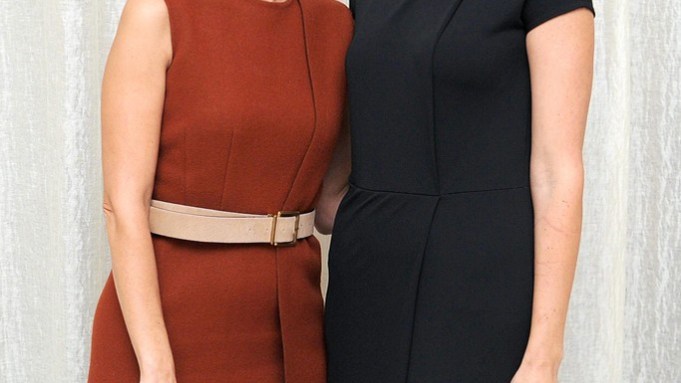 INTIMATE CHAT: More than 100 fashion-conscious shoppers, industry executives and the media turned out Monday evening at an event hosted by Calvin Klein Underwear at Macy’s Herald Square to get a close-up of celebrity model-activist Christy Turlington Burns. They also listened attentively to Cindi Leive, editor in chief of Glamour magazine, who headed a Q&A with Turlington Burns on her life as a top model, a mom and her work as founder of Every Mother Counts, a nonprofit organization that strives to end preventable deaths caused by pregnancy and childbirth around the world.

Turlington Burns told the audience that landing her first assignment with the house of Calvin Klein was a “pivotal moment” in her legendary modeling career.

“It must have been a defining moment for you,” said Leive.

Regarding EMC, the maternal health advocate, who has two children — Grace and Finn — told the audience she knows first-hand the trauma of unexpected complications of childbirth, saying she had suffered postpartum hemorrhage.

“My pregnancy was wonderful, and I felt educated and had access to all of the information I thought I would need.…Then this unpredictable event happened of which I had no knowledge previously,” she explained.
That life threatening event became the motivation for Turlington Burns to create EMC in 2010.
“I believe women have the power to make the world a better place,” she said.

Calvin Klein Inc., a subsidiary of PVH Corp., embraces the same philosophy. Earlier this month, WWD exclusively reported the fashion house entered into a unique partnership with EMC to extend their existing relationships and create a multiplatform program designed to broaden awareness of EMC’s mission.

Turlington Burns is currently featured in Calvin Klein Underwear’s global advertising campaign for fall and also appears in a multiplatform public service announcement for EMC created by Calvin Klein Inc.’s in-house advertising agency. As reported, the Klein company has also signed on to become a sponsor of EMC’s running team for this year’s ING New York City Marathon, which will be held on Nov. 3.