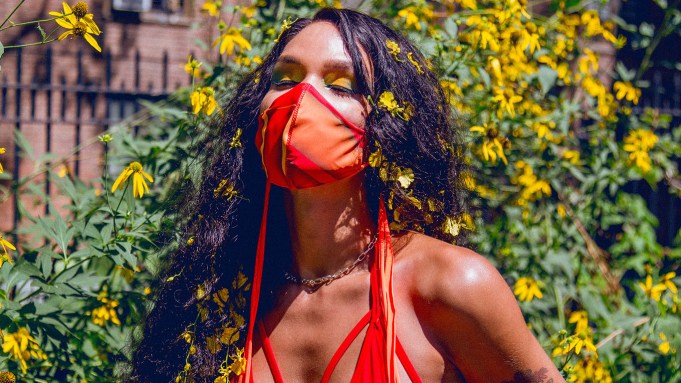 Back in February, Chromat founder and creative director Becca McCharen-Tran hosted a NYFW Olympics, telegraphing a message of inclusion and self-love. The event was a highly energetic and delightful celebration of gender inclusion in sports while spotlighting the brand’s vibrant fall collection.

When COVID-19 hit, McCharen-Tran — like most fashion creatives — took the time to reapproach the upcoming September fashion week while making internal brand changes. When approaching fall production, amidst lockdown, McCharen-Tran felt she couldn’t justify spending tens of thousands of dollars, in fear of never seeing an equal return; at the time, she ended up not producing a lot of her fall collection. Instead, she used excess fabrics to design face masks, while finalizing the pivot from wholesale to a direct-to-consumer business.

Approaching September, she wanted to seasonally align with the brand’s business model; on Tuesday night, McCharen-Tran re-debuted Chromat’s fall 2020 collection into a see-now-buy-now offering via “Joy Run,” a film by activist and filmmaker Tourmaline. The digital fashion week event was followed by a question-and-answer panel discussion centered around the director and stars of the film — transgender student athletes Andraya Yearwood, Terry Miller and ACLU attorney and transgender rights activist Chase Strangio. Recently, Miller and Yearwood became defendants in an ongoing Connecticut lawsuit by fellow high school runners’ families who sought to block them — and other transgender athletes — from high school sports, citing “unfair advantage.” Strangio is representing Yearwood and Miller.

The four-minute dynamic film centers around an empowering interview dialog between Yearwood and Miller — discussing their work as advocates for transgender girls’ inclusion in sports, the obstacles they’ve faced and their feelings of family within their sports communities. The film demonstrates the importance of representation and equality, with additional dialogue from Strangio, while celebrating bodies through movement and joy. The film also stars Maya Margarita, a non-binary trans femme artist; Chella Man, a deaf, trans, gender-queer artist; Maya Finoh, a nonbinary cultural worker and Jerron Herman, a writer, artist and dancer with cerebral palsy.

While the fall Chromat collection was previously inspired by gender-inclusive athletics (specifically looking at the now-postponed Olympics), McCharen-Tran knew spotlighting the ongoing topic was more important than ever.

“Listening to their stories, it’s such a huge loss not only for any other trans athlete who’s been pushed out of their sport because of their gender identity, but for the whole community,” she commented, adding, “It felt really necessary for those stories and conversations to be centered in our work because that was the inspiration for the collection. It really grounds it that this is happening now.”

The collection’s ombré-gradient palette and prints can also be seen through the film via eye makeup, representing an abolishment of the binary. “It doesn’t have to be one color or the other, one gender or the other. It can just be fluid,” McCharen-Tran stated. Additionally, hair was festooned with floral crowns, inspired by the ancient Greek Olympians and Marsha P Johnson alike.

“A lot of the big sports brands aren’t necessarily taking a stance on this issue in sport,” she explained, feeling grateful for her ongoing, positive relationship with the athletic and shoe giant. “I feel like every collaboration we come out with, I’ve made sure there are trans and nonbinary people in the campaign because I think this extreme binary separation that’s happening in sports happens in sportswear. It feels good to force the hand of a major athletic brand as well….But there’s definitely still a lot of work to be done in athletics.”

In addition to the film launch and panel discussion, the fall collection is available for sale on the brand’s reinvigorated e-commerce.