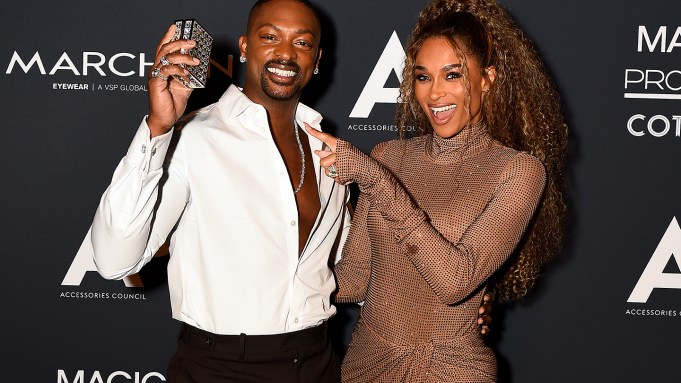 It was a new format for the ACE Awards, which typically gives out honors based on specific categories for design, sustainability and retail excellence. This year, the council chose to recognize companies for their contributions to the industry and society’s larger well-being during the pandemic.

“The way we tweaked the awards this year was not to honor designer of the year or brand of the year, but to honor doing good instead of doing beautiful. Everyone had beautiful things, too, but the stories behind what our industry did is what I’m most excited to share with people,” said Accessories Council president Karen Giberson.

At check-in, guests were allowed to opt for green, yellow or red ribbons depending on their comfort level relating to the pandemic. “Yellow is if you want to talk but are like, ‘don’t touch me,’” Giberson said of the system. Toward the end of cocktail hour, it became clear that yellow ribbons were the crowd favorite.

Smith, a designer that specializes in going-out clothes, said “I’m excited to be back out — specifically bringing New York back, this high level of energy and glamour. I’m happy to be celebrating innovation and design and fashion in New York. And to get back to the ideas of what nightlife is all about.”

Carolina Herrera creative director Wes Gordon concurred, saying, “I think we all learned not to take anything for granted, whether it’s dinner with friends or getting dressed up. All these things we used to be kind of blasé about as New Yorkers are things we realize are special moments now.”

Lucky for Gordon, the brand he now helms is a known specialist for party looks. He says this has helped Herrera’s sales and is creating new momentum in its stores. “We are seeing women of all ages, but the common thread is a desire for fabulous, unforgettable, fun dressing. I think there is a lot of pent-up joy — people are ready to have a good time and parties are resuming. Women of all walks of life are coming in looking for something that makes them feel beautiful,” said the designer.

Siriano had a wryer outlook on the revival of party-going, particularly for fashion industry jaunts: “I think this is what makes New York. Otherwise we are just stuck in our small apartments and what else do you have? So I think the social scene in New York is what makes New York sort of magical on those nights. Seeing people you have seen for years, especially in fashion, which can be a very closed-off business, it’s now nice to all get to be together and feel like we don’t all kind of hate each other.”