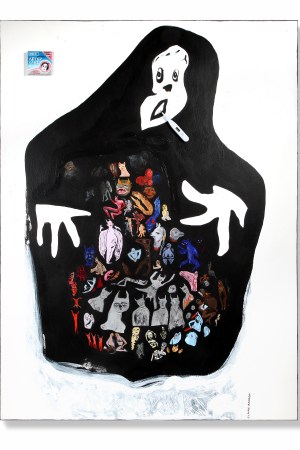 Titled “Bed, Bath & Beyond,” the mixed media exhibit will feature 17 pieces in ink, neon and acrylic.

Barrow references the ritual of baptism against the daily habit of taking a shower or the fear of germs within a series of canvases, neons, shower curtains and toilet rolls.

“My initial reference point was social anxieties in British modern life. Then I was researching imagery from the Renaissance and Christianity’s depiction of hell, baptism and rebirth, so I started thinking about the similarities between that and the modern rituals of washing and feeling clean or free of guilt,” Barrow told WWD. “Once I had began painting and drawing, though, it was very much coming from my own imagination, I began referencing my feelings and instincts rather than taking any kind of direct visual inspiration.”

The NewGen recipient,who debuted her label as part of Fashion East during the spring 2013 season, has always blurred the lines between art and fashion.

“Every piece I create has art on it, there is a complete crossover between my fashion and art work,” said Barrow.

The London-based designer staged her spring 2016 presentation last February, as an art exhibition. Known for screen-printing or hand-painting, she incorporates her signature drawings on clothing and uses them to convey political and social messages.

The idea for the exhibit was developed last year, after M.Goldstein’s gallerist Nathaniel Lee-Jones asked Barrow to paint a triptych on canvas which was later sold through the gallery.

The designer created all the pieces on display specifically for the exhibit with plans to continue selling her work as an artist and staging more exhibitions in the future.

“I want to continue to bridge the gap between being an artist and a clothing designer.” adds Barrow. “Also, I’d like to go into other areas, such as performance for example, but that will be something to think about in the future.”

The exhibition will open April 17 and run through April 24 at the M. Goldstein gallery.