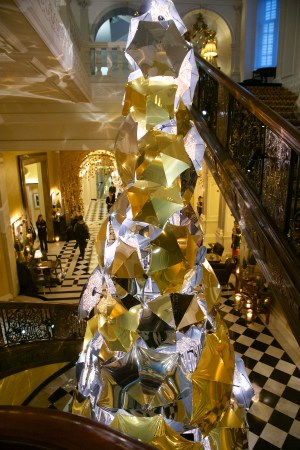 HIGH SHINE: Claridge’s unveiled its first Burberry-designed Christmas tree in the hotel lobby on Monday. The shiny, motion-responsive tree is made from nearly 100 umbrellas, each of which is finished in bespoke gold and silver metallic fabric. As guests walk by the towering structure, 77,000 individual lights will be triggered, sending twinkling beams into the lobby of the London hotel.

Burberry has also created a Snapchat geo-filter that will enable all Snapchat users to frame their images with metallic Burberry umbrellas, inspired by those on the tree. The bespoke filter, which launches Monday, will be accessible to Claridge’s visitors throughout the holiday season. Christopher Bailey, Burberry’s chief executive and chief creative officer, plans to host an event in the lobby later this week to mark the unveiling.