In what will be her second installation as the Lungaro Collection’s artist in residence Simone D’Auria has unveiled “Personal/Unpersonal.” 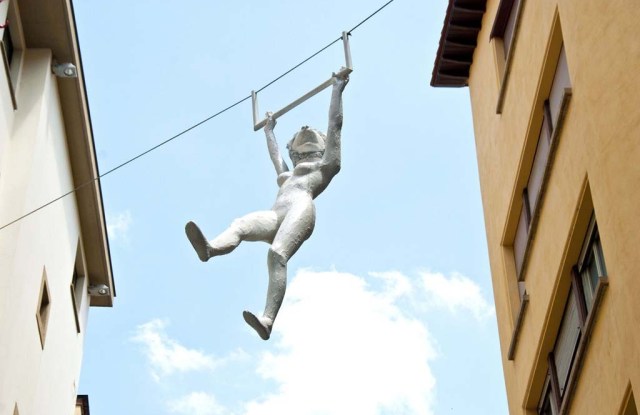 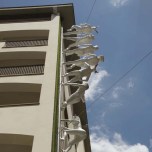 CLIMBING THE WALLS: In what will be her second consecutive installation as the Lungaro Collection’s artist in residence Simone D’Auria has unveiled “Personal/Unpersonal” in the Vicolo dell’Oro hotel in Florence. Trained as an architect, D’Auria has drawn inspiration from the “Portrait” concept, which is also the name of the newest luxury hotel in the Lungarno Collection’s portfolio. Eighteen humanlike figures with animal faces have been installed climbing up the exterior of the Gallery Hotel Art.

The inspiration was the great men who made the city of Florence and who were commonly described to the people using emblems that depicted them with the heads of animals. “Personal/Unpersonal” is near Ponte Vecchio and the Vasari Corridor.

The Ferragamo family owns the Lungarno Collection, as guests can surmise from the assortment of framed family photos in the Portrait Firenze. A queen was the first guest to check into the Portrait Firenze, according to chief executive officer Valeriano Antonioli, who declined to identify the royal guest. Noting that Lungarno’s locations tend to be a short enough walk to designer stores so that female guests can get there comfortably wearing serious heels, Antonioli said potential Portrait sites are being explored in Rome, Venice, Milan, Paris or London.

As for the Portrait Firenze, every member of the family has a separate role. “One member helped us to select the uniforms and another one was more involved with the selection of the interior designer [Michele Bönan.] Everyone is involved with the restaurant – everyone,” he said. (A yet-to-be-revealed Italian chef who at the age of 22 became the youngest chef to earn a Michelin star will start manning the kitchen July 7.)

Out-of-towners can also get an inside tour of Florence’s fashion scene by arranging for special tours of Santa Maria Novella and other local destinations. Throughout the hotel, there are 600 photographs of Florence in its fashion heyday. Ferragamo started in Florence, and Gucci, Pucci, Missoni and Cavalli all have roots in the city, Antonioli said. “Most people don’t know that fashion started in Florence because in the Seventies it moved to Milano. And Milano is seen today as the capital of fashion but only becase the media and the businesses are in Milano.But the real creativity of Italian fashion and a lot of the productivity still today comes from Florence,” he said.

The city is expected to become even more of an attraction next week when Andrea Bocelli performs to celebrate the new lighting on the Ponte Vecchio. Antonioli had cut his trip short to get back for the festivities — “This is a once in a lifetime thing,” he said of the citywide event.