More than 500 people turned up to see the brand's first runway show in the country. 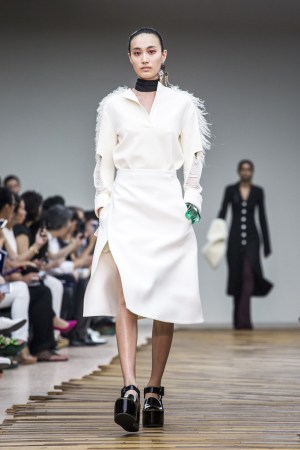 FIRST TIMER: Phoebe Philo’s fall collection for Céline took center stage among China’s fashion tastemakers last Thursday evening with the house’s first runway show in the country. More than 500 people turned up to see Céline’s Beijing runway debut in a massive industrial water tank converted into a stylish event space at the capital’s 798 Art District. Celebrity guests included singer and actress Faye Wong, who is featured in the June issue of Vogue China in a lengthy pictorial of Céline’s fashions. Céline chief executive officer Marco Gobbetti said in an interview earlier in the week that the event was designed to both thank Céline’s devoted following in China and deepen knowledge about the brand. Of Céline’s 90 stores worldwide, 20 are in China.

A media-shy Philo, Céline’s creative director, declined interview requests about the Beijing event and avoided photographers at the show. She appeared briefly at the end of the runway show, peeking out to acknowledge her fans.