Closing the Curtain on Couture Week

Louis-Marie de Castelbajac, Virginie Courtin-Clarins, Guillaume Henry and Serkan Cura were among guests at the garden party on Thursday night. 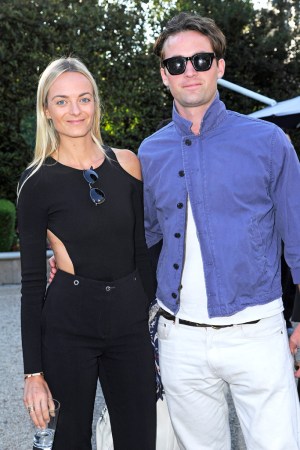 BUSY AS BEES: With another heat wave waiting around the corner, designers and industry executives gathered to mark the close of couture week in Paris at a sunny garden party on Thursday night.

“But it turned out patriotic,” teased Virginie Courtin-Clarins, sipping on a glass of bubbly.

Dressed in blue, white and red, the colors of the French flag, de Castelbajac said he was getting ready to launch a swimwear collection with Mackeene in homage to painter David Hockney.

“It will reflect easy Californian living – very colorful and light. We also want to deconstruct towels to mess with people’s minds,” he said of the project, slated to hit stores in 2016.

Courtin-Clarins divulged she was focusing on the first line of bags for Mugler.

“We have just received the first, first, first prototypes. So it’s a work in progress. But we will already have them in the show in September. Accessories are very important for us. We just wanted to establish the Mugler woman first before taking the next step,” said the brand’s director of development, marketing and communications.

Guillaume Henry, meanwhile, was worried about Greece, where he is going on vacation.

“It might sound silly, but it’s one way of showing support for the country. I adore the life there – it’s the best ever,” he enthused, sporting an unusually perky mint-hued shirt.

“It’s supposed to be a non-commercial color. You know, I only buy when I need,” he confided.

For some, vacation was still a long way down the road.

“I’m already working on the next Victoria’s Secret show,” said feather couturier Serkan Cura of the display in November.

Cura let it slip that the 2016 edition would exceptionally take place in Paris, accompanied by a large retrospective at the Grand Palais.

“I am restoring old stuff and making new. It’s going to be completely crazy,” he promised, dressed in a midnight-blue tux by Jean Paul Gaultier. “In two years, this piece will be a collector’s item,” he smiled, knowingly.

Silently absent from the couture calendar for the past seasons, Christophe Josse said he had to put his brand on hold, due to a fallout with his business partner and investor. But while looking for a new financier, Josse teamed up with French leather goods maker Maison Vignes for a collection of bags.

“I was only half-convinced in the beginning, because I had never done anything like it before, but I’m very content with the result. It’s about 10 pieces, lots of exotic leathers – lizard, iguana, crocodile, but also calf. A clean and pure aesthetic. We are launching in September,” he said.

Meanwhile, couture and ready-to-wear houses were satisfied with shopper turnout while shows were on.

“Traditionally, this week is a very strong week, both in traffic and sales,” said Ralph Toledano, president of the Fédération Française de la Couture, French fashion’s governing body and the party’s host. “The affluent customer does not need to rely on sales, so he is buying new product early at full-price. And there have been many more Americans coming lately.”