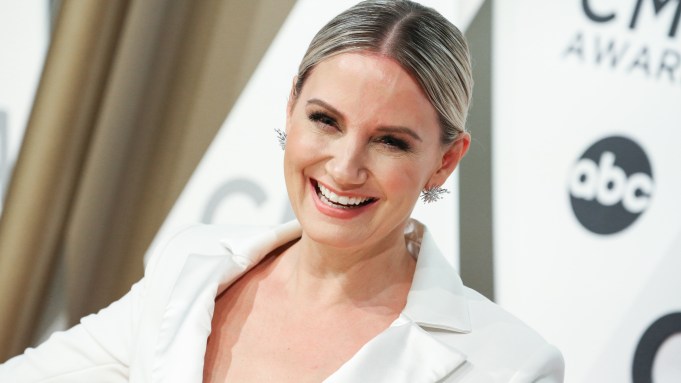 Jennifer Nettles used the CMA Awards red carpet on Wednesday night to shine a light on gender equality in the country music industry.

The country singer attended the 2019 CMA Awards held in Nashville dressed in a custom Christian Siriano white suit and hot pink cape, which carried the message “Play Our F–in Records Please & Thank You!” and “Equal Play.” Nettles worked with Siriano and artist Alice Mizrachi to create the look.

As this year’s awards show was a celebration of female artists, Nettles used her red-carpet look to spotlight the fact that female musicians don’t receive as much recognition as male musicians within the country music genre.

Nettles elaborated on the problem and her look in an Instagram post, stating the statistics that “Sixteen percent of the top 500 songs over the last four years were [by] women.”

“The piece that [Siriano and Mizrachi] created for me is a beautiful celebration of women in country music as well as a call to action within the industry at large,” she continued. “I am honored to get to be here at the [CMA Awards] celebrating other women in country music. We need the celebration and support of women to move into country radio and country play listing. We want our songs to be played and our stories to be heard. The more our songs are played, the more women get to hear their own stories, challenges and triumphs reflected.”

Nettles was joined on the red carpet by a host of other musicians and celebrities, including Reese Witherspoon and Nicole Kidman — both dressed in Versace — and Gigi Hadid in Helmut Lang, who accompanied Kacey Musgraves, dressed in a feathery yellow Valentino spring 2020 dress.

Click through the above gallery to see more red-carpet looks from the 2019 CMA Awards.

Midland on Creating a brand On Stage and Off