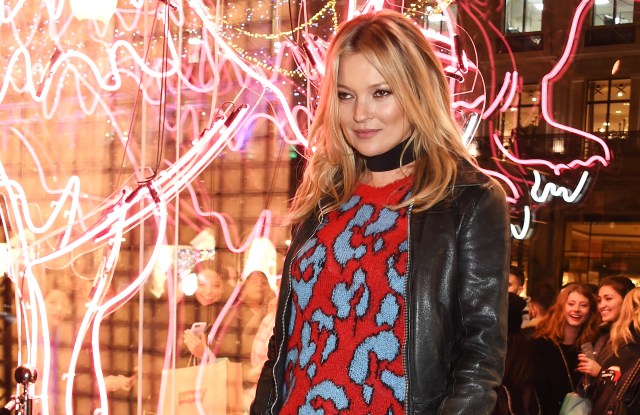 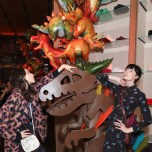 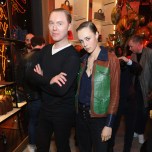 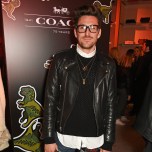 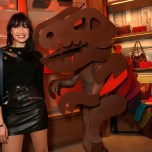 NEW YORK STATE OF MIND: Following the launch of its new house on Fifth Avenue last week, Coach let the good times roll with a party to mark the opening of a Regent Street flagship on Thursday night.

Located on 206 Regent Street, next door to Stuart Weitzman (which is owned by Coach) the new 5,425 square feet space showcases the brand’s new retail concept.

Designed by creative director Stuart Vevers in collaboration with William Sofield, the shop aims to embody the concept of modern luxury and focuses on customization, with stations offering monogramming and made-to-order services.

It also highlights the brand’s playful spirit, with a metallic sculpture of Rexy the dinosaur, who stomps his way across the brand’s rtw and accessories collections, at the entrance of the store. Rexy also appears in street-facing windows, in the form of a neon pink light installation.

“It feels like a home-away-from-home because my house is filled with dinosaurs. I had a sweet chat with Stuart about it and he said that the message is embracing the child within, which is great. He is giving a sense of fun and clothes that young people want to wear,” said O’Connor.

“What I like most about the store is Rexy. She’s completely random. What appealed to me is that she had no connection to the history of Coach,” said Vevers.

Taking a cue from its Fifth Avenue counterpart, the Regent Street store also features a a mechanized conveyor belt with rotating products such as handbags, jackets and key fobs. Vevers said it’s a symbol of the brand’s evolving nature.

Coach was originally located at the lower end of the street, but wanted to relocate as part of its efforts to refine the brand image under Vevers. It is the latest big American brand to open a flagship on the street, joining Michael Kors, Polo Ralph Lauren, Kate Spade New York and, most recently, Stuart Weitzman.

The store stocks the brand’s men’s and women’s full rtw and accessories collections, including a series of handbags and outerwear that incorporate London-themed varsity patches, which are exclusive to the Regent Street store.