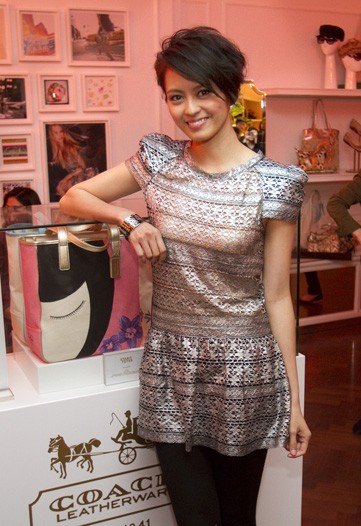 SHANGHAI COACH: A slew of Asian stars descended on Coach’s new Shanghai flagship Thursday night. The opening party, hosted by Coach chief Lew Frankfort and other top Coach brass, attracted the likes of Hong Kong singer and actress Karen Mok as well as fellow thespians Gigi Leung, Yao Chen and Li Xiaoran. The four women are part of an international roster of celebrities tapped to design one-of-a-kind charity tote bags for the occasion. Leung’s tote features part of a girl’s face and two purple flowers. “The pink represents spring, and that girl is me. I’m missing someone, though I’ll keep the name to myself,” she teased. The bags, which are up for online auction until May 13, are on display in Coach stores throughout Asia. Proceeds will benefit actor Jackie Chan’s children’s charity.

Belvedere will open a 6,000-square-foot pop-up space in New York from May 12 to 16 at 414 West 14th Street, opposite the Matthew Williamson store, that will be home to a series of promotional events. DJ Leigh Lezark of The Misshapes, outfitted in a custom-made jumper in the Belvedere print, will host a launch party for the new vodka there, in addition to events with Out magazine, style consultant Bevy Smith and comedienne Chelsea Handler. The Matthew Williamson initiative follows up on Belvedere’s collaboration with shoe designer Jonathan Kelsey last year for the launch of its black raspberry flavor. This year, the Polish vodka has sponsored events for Alexander Wang, Alice + Olivia, Jeffrey Fashion Cares and a raft of New York Fashion Week parties.

VERA BACK ON CAMPUS: Vera Wang earned an art history degree at Sarah Lawrence, but her most recent academic accolade has come from Harvard University. The designer was on the Cambridge, Mass., campus a week ago to pick up the first annual Leadership in the Arts Award. Her husband, Arthur Becker, and younger daughter, Josephine, made the trip for moral support, as did her company’s president, Mario Grauso, and his son, Harry. Apparently, the teenagers are ambitious like their parents, having made time for a campus tour during their stay.

MILLER TIME: Gold-medal winner Bode Miller visited Wall Street on Friday, but it wasn’t for his stock portfolio. He was the guest of Hublot, the Swiss watch brand, which has extended its sponsorship of the athlete for another year. Hublot’s chief executive officer, Jean-Claude Biver, made the announcement at Cipriani Wall Street, where Miller brought his three medals from the 2010 Vancouver Games — a perfectly matched set of gold, silver and bronze. Miller said although he hasn’t decided whether he’ll compete in the 2014 Winter Olympics in Russia, he’s definitely on board for the World Cup next year — although he may limit the number of races he’ll do. To commemorate Miller’s return to the slopes, Biver said Hublot will create another limited edition watch for the athlete. The company’s Bode Bang watch — only 250 were made — sold out this year.

OUT IN HOLLYWOOD: Us Weekly threw its seventh annual Hot Hollywood Style party Thursday night at Drai’s in the W Hollywood hotel, drawing honorees Jennifer Lopez (Style Icon of the Decade), Anna Kendrick, Sheryl Crow, Ryan Kwanten and Sofia Vergara. And many of the celebrities copped to reading the weekly. “I like the fashion part, seeing what everyone is wearing,” said Nicky Hilton. Actress Lala Vasquez, pictured in this week’s issue trying on wedding dresses with pal Ciara, said, “I read it for fun. I don’t read it to learn anything.” As actor Laz Alonso put it, “It’s a little bit of guilty pleasure when we read Us Weekly.”