Moschino hosted a cocktail party to celebrate Ross Bleckner's appointment as the goodwill ambassador for the United Nations Office on Drugs and Crime. 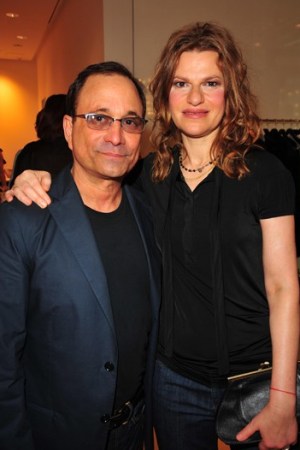 UNITED COLORS: On Tuesday night, Moschino hosted a cocktail party at its Meatpacking District boutique to celebrate Ross Bleckner’s appointment as the goodwill ambassador for the United Nations Office on Drugs and Crime. The painter is the first fine artist to hold such a distinction, and it’s already taken him far away from the rarefied gallery world with a trip to a refugee camp in Uganda’s Gulu region. “I took art supplies, and we just tried talking to these children, who are the victims of atrocity, to help them access their feelings about their situation and their lives,” explained Bleckner of his work with 13- to 19-year-olds of the war-torn region. “The goal is to have these children have some self-esteem and, as a result, a lot of them have expressed the desire to go back to school.” The program, which will be replicated in other camps, will be feted with a May 12 benefit and art sale called “Welcome to Gulu,” marking Bleckner’s official appointment at the United Nations. A big-name committee will host, including Agnes Gund, Calvin Klein, Alec Baldwin, Eli Broad, Rachel Weisz, Jeff Koons, Natalie Portman and Sandra Bernhard. And despite the serious nature of the UN’s work, even Bleckner admitted his lofty title was earning him a bit of teasing. “My friends are already kidding me about it,” he admitted. “But I don’t commit crimes, and I don’t take drugs, so I’m clean.”

EYES ON COSTA: The jury is in for this year’s National Design Awards and Francisco Costa is said to be the winner for fashion. Staffers at the Cooper-Hewitt National Design Museum, which present the awards annually, were tight-lipped about the 2009 finalists and winners that will be unveiled Friday. Ralph Rucci, Michael Maharam, architect Marc Tsurumaki, Antenna Design’s Sigi Moeslinger, Office dA’s Monica Ponce de Leon, Google’s Marissa Mayer and YouTube’s Margaret Stewart were some of this year’s jurors. Meanwhile, during Costa’s visit to the “Martha Stewart Show,” set to air this Friday, Stewart tottered in on a pair of gleaming camel Calvin Klein block heels, winning the designer’s praise. Stewart said she liked them, too “if you stand. But if you try to walk…” The show takes viewers into the Calvin Klein atelier and demonstrates the making of origami pleats. Costa exhibited a different kind of artistry in Stewart’s kitchen, where he demonstrated how to make two kinds of caipirinhas (passion fruit and ginger) from his native Brazil.

BURBERRY TAKES BEIJING, AGAIN: Burberry chief executive Angela Ahrendts and creative director Christopher Bailey touched down in China this week to cut the ribbon on Burberry’s 37th store in the country, a 5,000-square-foot unit at Beijing’s Jinbao Place. The opening party is tonight and will be cohosted by actress Maggie Cheung, star of such films as “In the Mood for Love” and “Clean.”

The new store is the brand’s sixth unit in Beijing, and one of its largest in the region. There was a soft opening earlier this year, and the store carries the full range of men’s and women’s wear from the Prorsum and London collections, as well as accessories. Burberry’s next major store opening in Asia will be a 9,000-square-foot unit at ION Orchard later this spring.

HOUSE CLEANING: Kenzo Takada is making use of the luxury 12,000-square-foot Paris home he designed 20 years ago — before moving out next month. “This is one of the last parties,” he said Tuesday night as he welcomed dozens of guests, including Julie Depardieu, Dolores Chaplin and Elisa Tovati, to fete his latest project, a limited edition design of a Power Plate vibrating exercise machine. The designer has sold the Japanese-style building, which boasts an indoor pool and terrace, to an unidentified French television producer and will move to a smaller home across the Seine next month. “I want to turn the page,” he said, adding he’s made up his mind what will be sold at an auction this June: “Everything except for presents from friends.”

Over two decades, Takada collected more than 1,000 pieces of Chinese, Japanese and Asian art, including an enameled teak Buddha from pre-13th-century Burma and a wooden horse sculpture from Northwest China, dating back to the 2nd century, which is estimated at between 80,000 and 100,000 euros, or between $104,318 and $130,398. Viewings will be held in the apartment in May.

JAEGER’S AMERICAN COMEBACK: Jaeger is returning to the U.S. market — on the Web. The British brand, owned by Harold Tillman and run by chief executive officer Belinda Earl, has expanded its Jaeger Online business to the U.S. Customers can now buy the Jaeger men’s, women’s, accessories and home collections, which are priced in pounds and delivered directly from the label’s U.K. warehouse. “Historically, the U.S. has been an important market for the brand, and we look forward to reintroducing the newly repositioned Jaeger to our American customers,” said Earl. Jaeger Online is the brand’s second-largest store, and international traffic accounts for about 25 percent of sales, said Earl. Jaeger had operated a string of retail outlets in the U.S. as recently as 2003, but when Tillman bought Jaeger, he shuttered them.

ROYAL CONNECTION: After Stella McCartney, Corto Moltedo and Lefranc Ferrant so far this year, Wunderkind may be the next fashion brand to land a Palais Royal address. The German designer collection by Wolfgang Joop, which opened a three-story London unit last November, is negotiating a lease in the historic courtyard location, which has become one of the hottest retail destinations in Paris. “It’s more than a street, it’s a destination,” said Mario Lefranc, who, along with designer partner Béatrice Ferrant, opened a two-floor store there this week. The all-white boutique, previously occupied by Robert Normand, is their second after a Saint-Germain location last year. The duo is eyeing China and Dubai for future units.

DANCE CARD: Mayor Bloomberg and his girlfriend, Diana Taylor, were surprise guests at the 25th anniversary party for the Stephen Petronio dance company on Tuesday evening at the art-filled East Village home of Greg Morey, a friend of the mayor’s. After spending the day calming New Yorkers’ swine flu fears, Bloomberg relaxed with a glass of red wine and affably recalled to WWD his days working on a Garment Center commission for former Mayor Edward Koch. “I was the only one who showed up to meetings,” he confided.

Earlier in the night, Petronio and his dancers performed the premiere of a new work, “I Drink the Air Before Me,” at the Joyce Theater. Rising design star Adam Kimmel outfitted dancers in his signature trenchcoats, thermals and jumpsuits for the show. In the audience were Lucy Liu, Patricia Field, Tara Subkoff, Karen Erickson and Arden Wohl.

CHARITY WORK: In a typical quirky getup — a large black hat and an off-white corseted dress — Lady GaGa hogged the limelight at Hogan’s Rue du Faubourg Saint-Honoré store during a cocktail held for the disabilities charity Best Buddies in Paris on Thursday night. “She is quite incredible; she has a style,” marveled Clotilde de Kersauson, stepdaughter of Ines de la Fressange, who helped host the evening with Best Buddies founder Anthony Kennedy Shriver, who is John F. Kennedy’s nephew. De Kersauson, likewise, sported a style all of her own, a sweater featuring blocks of green, white and blue that she designed for the Italian brand Verger, which just opened a boutique in Milan. Among a crowd of actresses, including Dolores Chaplin and Delphine Chanéac, Gabriella Wright hinted at an upcoming humanitarian project with Diesel’s Renzo Rosso. Likewise in the charity vein, Putrafranges DJ Cécile Togni said she has persuaded a host of friends, including Cécile Cassel, Vahina Giocante and Emma de Caunes, to part with unwanted clothing to be sold for charity at new Parisian concept store Hôtel Particulier in June. Following her clothing line for Maje, Togni said her next collaboration is for an underwear label. Hogan, meanwhile, will donate 10 percent of its sales to Best Buddies. More events with the charity are slated for Hogan stores in Düsseldorf, London and Milan throughout May.